I am always amazed at how little I know, and how little all of us know. Did you ever hear of this nuclear accident?


The Goiânia accident was a radioactive contamination accident that occurred on 13 September 1987, at Goiânia, Brazil. Considered one of the worst nuclear disasters in history, it took place after an old nuclear medicine source was scavenged from an abandoned hospital site in the city, which serves as capital of the central Brazilian state of Goiás. It was subsequently handled by many people, resulting in four deaths and serious radioactive contamination of 249 other people. The dispersal of radiation was equivalent to a medium-size dirty bomb. About 130,000 people overwhelmed hospitals. Of those, 250 people, some with radioactive residue still on their skin, were found to be contaminated through the use of Geiger counters. Topsoil had to be removed from several sites, and several houses were demolished. All the objects from within those houses were removed and examined. Those that were found to be free of radioactivity were wrapped in plastic bags, while those that were contaminated were either decontaminated or disposed of as waste.

Everyone thought that Arctic sea-ice extent had bottomed out on Sept 10th, because it increased for a few days after that, but then it started to decrease again -- and is still decreasing. It's not going to threaten 2007's record low, but it still might come in 2nd place. In any case, it's fun to watch it defy simple expectations.

"Where they burn books, they will ultimately also burn people."

What pacifist notions can possibly compete with helicopters set to AC/DC?
It's not even a fair contest.

I am simply linking to song because I like it, a lot, and it's my blog:


Dirty on Purpose broke up over two years ago, which is a god-damned shame, because very, very few people can make music and noise like this. I certainly can't. You can't. Who can?

I thought I had the subject of genetically modified organisms (GMOs) pretty much figured out. I spent a lot of time a few years ago investigating them, and even wrote a short piece for Wired magazine, and had decided that they probably weren't going to cause any harm.

But this morning I read this Washington Post article about the FDA's approval of GM salmon, and now I'm not so sure anymore. Something about it really skivved me out.

My basic reasoning is this: everyone thought they had mammalian cloning all figured out, and then they cloned a sheep (Dolly). It turned out that Dolly had some very unforeseen problems, especially obesity and early aging. She had telemere problems.

Why didn't the all-wise scientists foresee this fundamental problem, if they have such control over genomes?

Now we're being expected to accept GM salmon, even though they have been forced to grow about twice their normal size. This is a HUGE difference in an organism and to think that we understand all the implications of it strikes me as silly.

You really, really have to watch this debate on Australian television, which appeared last night, where the late Stephen Schneider takes on dozens of climate skeptics, answering all their questions.

Schneider takes them head-on and answers all their questions, and, when appropriate, tells them they simply don't know what they're talking about. And most of all, he stresses that scientists have (of course!) thought about all these issues, in far more detail than anyone in the audience has.

If only American television did anything like this. Even if the concept of a logarithm baffles most of the audience.

Via: Tim Lambert and Deltoid

This Boston Globe editorial doesn't have sourcing, but some of its claims definitely make you think:

They don't say how much energy is used to route information versus to store information, but I would guess that the latter dominates. What will a 35x increase mean for energy consumption?

On the Interacademy Council Report

While everyone is bloviating about the Interacademy Council Report on the IPCC processes, can we please note that they wrote the following:

I have an op-ed in today's Oregonian, correcting some of the endless streams of untruths that come from skeptic Gordon Fulks.
Posted by David Appell at 9/03/2010 12:38:00 PM 5 comments

Despite what you might have read, global warming did play a role in the recent Moscow heat wave.

Recently NOAA wrote about the heat wave in western Russia, attributing it to "atmospheric blocking." They went on to say that greenhouse warming played no role in the high temperatures:


Despite this strong evidence for a warming planet, greenhouse gas forcing fails to explain the 2010 heat wave over western Russia. The natural process of atmospheric blocking, and the climate impacts induced by such blocking, are the principal cause for this heat wave. It is not known whether, or to what exent, greenhouse gas emissions may affect the frequency or intensity of blocking during summer. It is important to note that observations reveal no trend in a daily frequency of July blocking over the period since 1948, nor is there an appreciable trend in the absolute values of upper tropospheric summertime heights over western Russia for the period since 1900.

But something about this explanation doesn't smell right. Regional climate phenomena are always going to be conmplicated with many factors in play.

So I asked Kevin Trenberth, Head of the Climate Analysis Section at NCAR, and he says that global warming certainly played a role in the heat wave:


The "stalled jet stream" or really the so-called blocking pattern is merely a description of the atmospheric state or phenomenon, not a cause. The question is why is it like that? For that we seek to find systematic influences (what we call forcings) on the atmosphere that tends to lock it into one state. The main sources of such forcings are the mountains, land vs ocean, and the heating of the atmosphere. Only the latter changes. With El Nino or La Nina, the changes in sea surface temperatures change the areas where convection, thunderstorms, tropical storms etc, occur systematically. The heavy rains in those phenomena produce large heating of the atmosphere through the latent heat release: the release of the heat that went into evaporating the moisture in the first place is given up when the moisture condenses. It is that heating pattern that sets up unusual wave patterns and teleconnections in the atmosphere. It acts a bit like a rock in a stream of atmospheric air, with ripples up and downstream. In the case of the very active monsoon, there tends to be generally rising air and a lot of heat released in the rains, and some of that air was coming down over southern Russia. "What goes up, must come down". We can demonstrate a direct link between the anticyclone over Russia and the monsoon rains over southeast Asia. This is in addition to the waves in the jet stream.

Under normal circumstances, it is not unusual for this pattern to develop over Russia, but it normally lasts only a week or so. What is unusual is the persistence and duration of this, so that it lasted 5 weeks or so. Weather systems tend to wax and wane but the anticyclones that move through stall and strengthen systematically in the same region because of the influence from SE Asia through the overturning monsoon circulation and the associated wave patterns.

In this way, we can assign blame for the atmospheric pattern to that of the sea surface temperatures, and the current La Nina. The latter determines the pattern. The elevated SSTs in the Indian Ocean and Indonesian region arise because of global warming and the effects of the last El Nino, and bolster the amount of water vapor available for all the storms, resulting in the excessive rains and flooding.

So there is a chain of events here, and several things have come together to make it record breaking. But it is not unexpected, even if it is not predictable more than a couple of weeks in advance.

Global warming plays a role by 1) elevating the SSTs in the Indian Ocean and Indonesian region, where it contributes to the excessive moisture and rains that gave the flooding over Pakistan, India and China; and 2) In Russia by adding to the heat and drying, making the drought more intense, longer lasting, and with stronger and record breaking heat waves. These events would not have happened without global warming.

The Hadley Centre has been doing some nip-and-tuck work on their global temperature data, but they now seem to have things up-to-data. The data have 2010 as the 2nd warmest year in their records, year-to-date. (1998 is the warmest, year-to-date.) The last third of 1998 was relatively cool compared to the first eight months of that year, but we're now entering a La Niña, so it could be a horse race to the end.
Posted by David Appell at 9/01/2010 06:22:00 PM 1 comments

Gallup has a worldwide poll out showing that the poorer a country is, the more religious are its citizens: 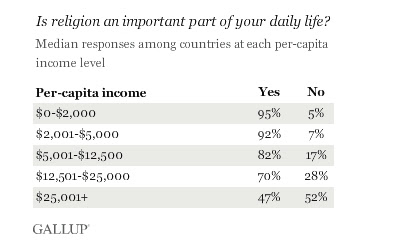 But yes, the United States is an exception:


Incredibly (and interestingly), only 17% of Swedes say religion is an important part of their lives, as do 19% of Danes. Yet these are among the most peaceful, socially advanced countries in the world. Food for thought.