Nicholas Cage looks for his lost pig in the Pacific Northwest, and apparently some degree of redemption in Portland:

"The Trick," a Movie About ClimateGate

The BBC is making a movie about Climategate, a "thriller" about the computer hacking scandal, to be titled "The Trick." Somewhat of a double entendre there.

The Trick will tell the story of how Professor Philip Jones, director of climate research at the University of East Anglia, found himself at the eye of an international media storm after leaked emails which suggested climate change researchers had exaggerated claims about the severity of global warming....

It led to Norwich scientists receiving death threats and one of the most rigorous scrutiny processes in UK academic history that ultimately found the research to be watertight.

The new film will chart the unjustified persecution of Prof Jones, to be played by Line of Duty and The Crown star Jason Watkins, and the fierce support as he fights to exonerate himself of his wife Ruth, to be played by Victoria Hamilton.

Phil Jones suffered greatly during Climategate, personally, and reportedly at one point even considered suicide. This "thriller" is exactly what he doesn't need.

You may recognize the actor playing him from his recent role in the popular Netflix series "The Crown," where Jason Watkins played the weak, uninspiring socialist Prime Minister Harold Wilson.

Let's see how badly the BBC -- who of course was part of the story -- gets this wrong for the sake of dramatization. 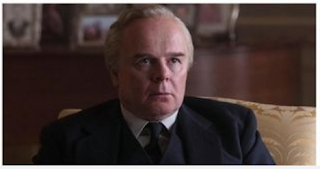 On Stealing the 2024 Presidential Election

This is from Jay Rosen, a prominent journalism professor at New York University, as mentioned in today's NY Times column by Ross Douthat, "Are We Destined for a Trump Coup in 2024?"

I agree with Timothy Snyder. This is where it's going, and there is presently nothing on the horizon that would stop it. https://t.co/osvhqph8IN pic.twitter.com/7NPzevHtZv


Personally it's difficult for me to see it coming to that. Trump looks more insane unhinged every day, is apparently obsessed with the recounts going on and convinced he'll be reinstated by August (which is beyond insane, into utterly delusional), and will be in enough legal difficulties by then that even all the Republicans afraid of him will breathe a little. But what do I know. Douthat writes.

In February, seven Republican senators voted to convict Trump in his second impeachment trial; just a few weeks ago, 35 House Republicans defied him and voted for the Jan. 6 inquiry. Even in a future where the G.O.P. takes back the House and the Senate in 2022, any attempt to overturn a clear Biden victory in 2024 would require most of the Republicans who cast these anti-Trump votes to swing completely to Team Let’s Have a Constitutional Crisis, with someone like Susan Collins or Lisa Murkowski casting the decisive vote. Which is imaginable only if some transformative political wave hits the Republican Party in the meantime — and barely so even then.

Then keep in mind, too, that in the event of a Biden-Trump rematch in 2024, Biden, not Trump, will enjoy the presidency’s powers; Kamala Harris, not Mike Pence, will preside over the electoral count; and Trump will be four years older, unlikely to run a fourth time, and therefore somewhat less intimidating in defeat. In that landscape, it’s at least as easy to imagine him going more limply into the good night as it is to imagine top-to-bottom G.O.P. enthusiasm for the Great Coup of ’24.

Which, again, does not make the worriers unreasonable; it just makes their we’re all doomed attitude seem extremely premature.

Video Clip of the Tank Man, and More

This clip is so much more than the singular image, and its initial seconds of the long, intimidating line of tanks rolling gives a sense of how much courage it took for this man to step in front of the tank line. Amazing that after all this time he's still unknown, but somehow, in the best sense of the mysteries and subtleties of history, wonderful too that he is. Everything doesn't need to be known.


On the other hand, here is a frightening image of what these tanks left being in terms of broken people and bicycles:

The Dream of a Ridiculous Man

"The more I learned, the more conscious did I become of the fact that I was ridiculous. So that for me my years of hard work at the university seem in the end to have existed for the sole purpose of demonstrating and proving to me, the more deeply engrossed I became in my studies, that I was an utterly absurd person."

Fyodor Dostoevsky, The Dream of a Ridiculous Man