Ice Is Properly Measured by its Volume, not Area

Tony Heller (was "Steve Goddard") is hawking the growth in Antarctic sea ice extent as, I guess, a proof against manmade warming. Like lots of them do.

First of all, the evidence for AGW is so overwhelming that the growth of sea in the Antarctic is something to be explained in the context of AGW, not proof against it.

It's a complicated continent, very different from the Arctic -- one a continent surrounded by water, the other water surrounded by continents. The NSIDC has a good page on the differences:


The Antarctic is almost a geographic opposite of the Arctic, because Antarctica is a land mass surrounded by an ocean. The open ocean allows the forming sea ice to move more freely, resulting in higher drift speeds. However, Antarctic sea ice forms ridges much less often than sea ice in the Arctic. Also, because there is no land boundary to the north, the sea ice is free to float northward into warmer waters where it eventually melts. As a result, almost all of the sea ice that forms during the Antarctic winter melts during the summer.

Some think the growth is due to shifts of winds in the southern hemisphere, or increased snowfall on the Southern Ocean, or (Manabe et al's 1992 prediction) an increased supply of water at the near-Antarctic ocean surface that could slightly lower sea surface temperatures. Or there might  be a problem with the data model. There doesn't seem to yet be a consensus.

Secondly, ice is measured by volume, not area, because for a given amount of heat, the melting rate varies as the mass changes, which is proportional to the volume change, not the area change. At the risk of being pedantic, recall from high school physics

(∝ means ("proportional to"). But (being even more pedantic), ΔV is not proportional to the change in area, but (for, say, a block of area A and height h, so V=Ah)

This is why, in a warming context, it's accurate to talk about sea ice volume, not sea ice area or extent. The downside, of course, is that we have daily measurements of sea ice area and extent, but only modeled results for sea ice volume. People follow extent because it's the only metric we have, except when papers come out with volume numbers.

Arctic sea ice is melting 10 times faster than the Antarctic is gaining sea ice. The Earth is now losing over a trillion tonnes of ice a year.

When talking about warming, viz. the energy imbalance of the Earth, the volume of ice is the appropriate metric, not its area.

No student of physics could pass on this video:

The once-burgeoning El Niño looks to be fizzling out -- the latest Niño3.4 SST anomaly has dropped out of the lower border of El Niño territory (≥ 0.5 C): 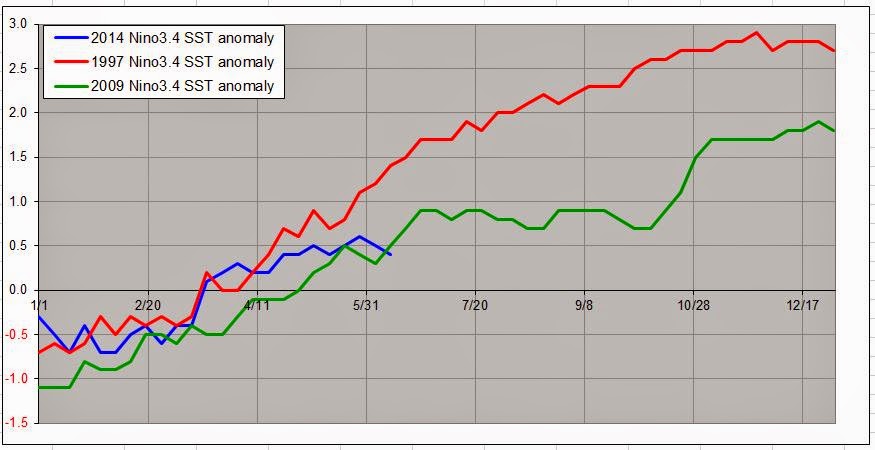 When Have 17-year Trends Been Significant?

Earlier I found that the 17-year trend of HadCRUT4 has been statistically significant only 49% of time (with lag-1 autocorrelation) since it began in 1850.

Here are those times -- when that trend has been statistically significant at the 95% confidence level, and the value of that trend.

At the present time, this particular trend is not statistically significant, with this level of autocorrelation factored in, and it hasn't been since March 2013. (I find that, instead, its ss=85%.)

"Suppose that you’re making a prediction — and every assertion about how the world works has to involve at least an implicit prediction of something, because otherwise it’s empty. This prediction comes from some kind of model — if you don’t think you have a model, you’re kidding yourself, and your model is all the worse because you imagine that you aren’t using it."

UAH's May anomaly for the lower troposphere is +0.33°C, the 3rd-warmest May in their records.

It also makes the last 10 years (120 months) the warmest in their records (error bars excluded):

Here is UAH compared to RSS, adjusting the latter to have the same baseline:

Over the last 12 months, UAH has been an average of 0.12°C above RSS. Roy Spencer says a new version of UAH's model will very slightly reduce their anomalies in the second half of their record, making them slightly more RSS-like.
Posted by David Appell at 6/10/2014 07:46:00 AM 1 comments

More on the Significance of Temperature Trends

I expanded on my post of the other day to include first-order autocorrelation when calculating linear temperature trends.

Not surprisingly, the percentage of times the HadCRUT4 temperature series is significant, for any interval of N years, dropped significantly:

BTW, a useful and easy-to-read introduction to calculating trends and their uncertainities is Statistical Issues Regarding Trends by Tom Wigley.

How Often is a Temperature Trend Significant?

I've finally learned enough Python in my spare time to calculate something I've wanted to do for awhile: begin to answer how often past temperature trends have been signficiant.

That is, if you calculate the all possible N-year linear trends for a dataset, how often are their statistical significance 95% or higher, for all N?

Of these 1,949 trends for N=2, how many have been statistically significant at the 95% level?

50%, if you don't include any autocorrelation. Obviously, with autocorrelation it will be smaller, because the error bars on the trend will be bigger.

So 10-year linear trends of HadCRUT4 have only been statistically signfiicant 65% of the time. 20-year trends 76% of the time. Etc. (This assumes, as usual, that the residuals of the linear fit are normally distributed.)

And, mind you, this is without any autocorrelation factored in, not even rank-1 autocorrelation between a temperature point and its nearest neighbor, let alone the exponential decay method of calculation autocorrelation described in Foster and Rahmstorf (2011) and used by the Skeptical Science trend calculator.

I'll get to those soon. But in the meantime, even this basic calculation shows that talking about 10- or 15 or 18-year trends, like Werner Brozek likes to do at WUWT, is meaningless, just mindless numerology.

Nor, of course, is there anything magical about 95%. It means the result is significant to about 2 standard deviations, and it's the common benchmark for medical studies, but high-energy physicists (say) often more, as, for example, the 5-sigma requirement for the discovery of the Higgs boson. In climate science, which isn't an experimental science (viz. you can't do as  many repetitive experiments as you want), you can't get that kind of data -- you take the data you can get. So like we're supposed to take action if a warming trend is 96%, but not if it's 94%,or 80%, or 60%? That's absurd, of course.

Numerology is not a substitute for thinking. And short intervals are not meaningful.
Posted by David Appell at 6/05/2014 07:48:00 PM 5 comments


"You are not stuck in traffic, you are traffic."

I just like this map, so am posting it. It's from "Shifting storms," by Hamish Ramsey, a News & Views story in the May 15th issue of Nature, which highlights a study that found the maximum intensity of storms is shifting poleward by about 1° latitude per decade, over the last 30 years. 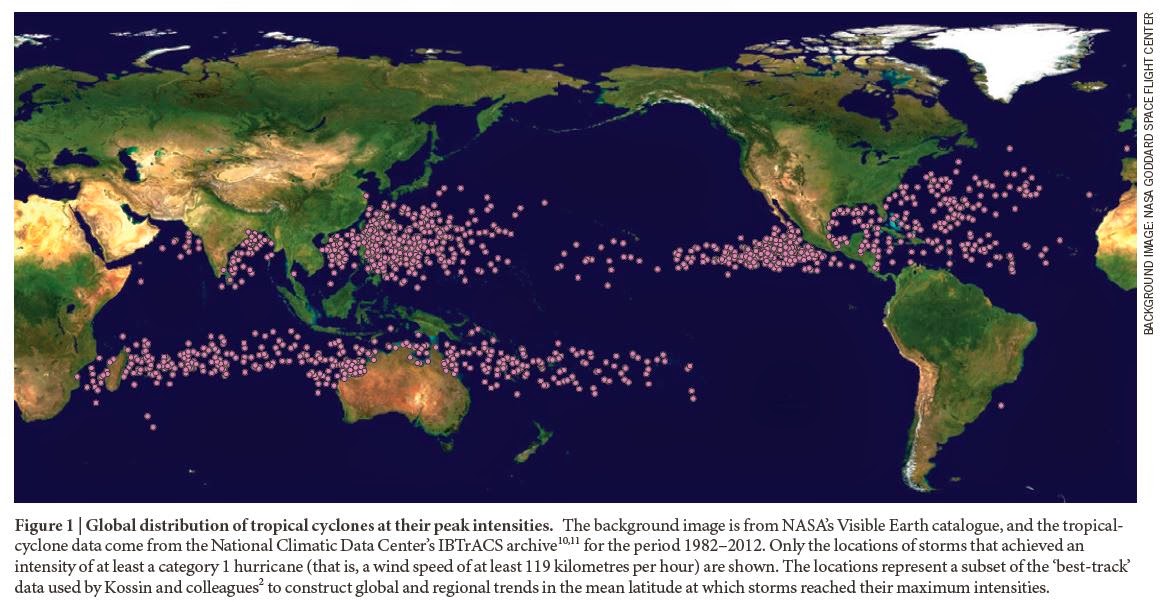 From a Washington Post article on rising sea-level in Norfolk, Virginia:


"'We don’t like being the poster child for climate change,' said the Rev. Jennifer Slade [of the Unitarian Church of Norfolk].... 'I don’t know many churches that have to put the tide chart on their Web site' so people know whether they can get to church."

Norfolk sits on the east coast sea-level hotspot, where land subsidence of 0.12 inches a year (3.0 mm/yr) is adding to the global rise of the ocean. The mayor is, for now, avoiding the hard questions:


Put it all together, as VIMS (Virginia Institute of Marine Sciences) scientists did when they were asked by the General Assembly to study recurrent flooding in tidewater Virginia, and models suggest tides ranging from 1 1/2 feet to 7 1/2 feet higher by 2100.

Five and a half feet represents “business as usual,” a vision of the future without “significant efforts by the world’s nations to curb greenhouse gases,” the report said. “Recent trends in Virginia sea levels suggest we are on [this] curve.”

Larry Atkinson, an oceanographer who is co-director of the Climate Change and Sea Level Rise Initiative at Old Dominion University, said when the mayor was asked about the report, he waved away the question. “He says, ‘I can’t think about five feet. What do you want me to do, move the whole city?’ ”

Yes, some parts of the city will have to be moved. Or just abandoned.