The Kaiser Family Foundation has published COVID-19 case and death numbers, by state, as of 1/20/22. They are, unfortunately, not surprising.

I'd just like to give some kudos to my governor, Kate Brown, who has maintained an indoor mask mandate here in Oregon since March 2020. Here near Salem everyone has been quite cooperative and still are. (I've heard stories that in red Oregon, on the east side of the Cascade Mountains, it's entirely different. But only a fraction of the population lives in that part of the state -- Western Oregon has 75% of the state's population.) From these data it looks like the mandate has made a real difference, and although some people give her grief for maintaining the mandate, it looks to have made a real difference. 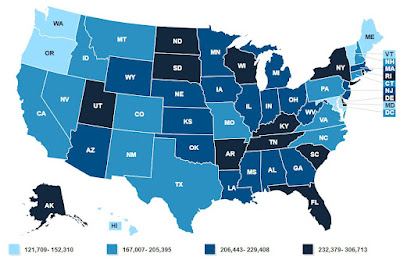 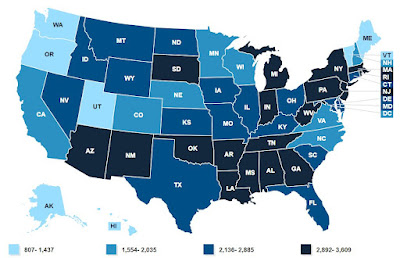 Schrödinger Was a Pedophile

Apparently this has been known for a few decades, but quietly, and it's hitting the news again: Erwin Schrödinger, famous for his fundamental contributions to quantum mechanics, was a pedophile who preyed on young girls. Girls as young as 12 and 17. Apparently he admitted to impregnated a girl who was 17 years old, who had a botched abortion and was thereafter unable to conceive for life. From Futurism:

Perhaps most diabolically, the physicist kept a record of his abuse in his diaries, even justifying his actions by claiming he had a right to the girls due to his genius.

Walter Moore, author of the biography “Schrödinger, Life and Thought” published in 1989, said that the physicist’s attitudes towards women “was essentially that of a male supremacist.” Disgustingly, the biography seemed to downplay and even romanticize his abusive habits, and describes him as having a “Lolita complex.”

Schrödinger also attempted a relationship with a different 12-year-old girl, disgustingly writing in his journal that she was “among the unrequited loves of his life.” However, he decided not to pursue her after a family member voiced their concerns that the physicist was a, you know, unrepentant abusive predator.

The Irish Times article from which the Futurism article is sourced is available only to subscribers, but apparently it says there is a petition to rename a lecture hall at Dublin’s Trinity University that’s named after Schrödinger.

I won't be surprised if, given the environment on campuses these days, there's a small movement to rename his equation and cat, but I doubt that will succeed. What do you think?

At 1.2°C of global warming, with current pace, we will hit 1.5°C in 2033 and 2°C by 2060. With last 7 years being warmest on record, 2021 among them, we have strong confirmation of the global climate crisis as shown in excellent analysis by @BerkeleyEarth https://t.co/MU3ub7cfrr pic.twitter.com/O5WnIo0aD0

OK thanks to commenters I think we're honing in on the truth about gasoline prices, by comparing them to median family income since 1990. It paints a much different picture than comparing them to personal income per capita:

Clearly median family income is barely, if that, keeping up with gas prices, and that's only in recent years. And now falling behind again.

And just as clearly, median family income isn't keeping up with personal income per capita -- evidence of the widening income inequality, I guess.

Now there's a tree/shrub in front of my porch with buds on it. I don't think this is normal for central Oregon in mid-January. And the buds have been there for several days -- I only took this picture yesterday. The meteorological records say the average daily temperature in Salem falls to a minimum on Dec11-Jan5; usually the third week of January is the week with snow here, though this year it was Dec26-28. May still snow more, who knows. I haven't kept close tabs, but it seems very early to see a bud on anything here. 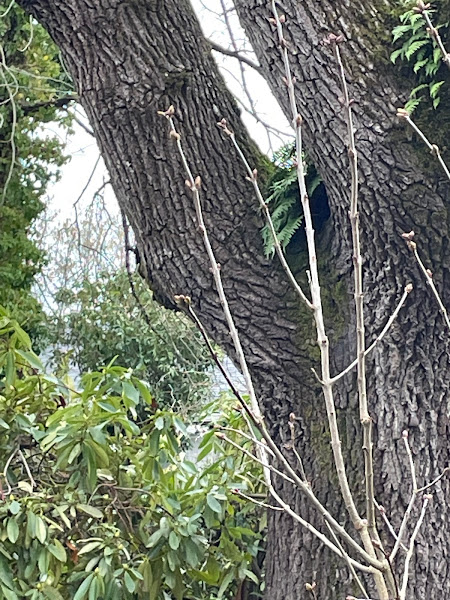 Here is the average US gas price vs personal income per capita, since 1990. Neither is adjusted for inflation, and both are set to a scale of 100 on 8/20/1990, when the gasoline data begins.

The personal income data is annual, so it ends in 2020.

So, at least for the average person, gas prices surged ahead under the oilman Bush, but income is now outpacing the price of gas over the last 30 years.

Even if you started working in 2010, you're still ahead, assuming you're getting the average increase in personal income.

But it never seems that way, does it?

The Price of Gasoline Isn't That High

Some people are complaining about the price of gas, and ok it is at a 7-year high. But both nominally and adjusted for inflation, it's been significantly higher much of the time over the last 15 years:

Gasoline prices here are the weekly US national average from the EIA's This Week in Petroleum, adjusted via the Consumer Price Index. The blurriness is brought to you by Google (who owns Blogger). Click on the graph to get a clearer version.
I keep track of what I pay for gas, and my mileage, and while I haven't adjusted it for statewide inflation here is what I've paid since two years before I moved to Oregon in 2006:

So there hasn't been much of any increase here, and would obviously be a slight decrease over time if adjusted for inflation.
I think people (that is to say, Americans) just like to complain about the price of gas no matter what, think they have an inherent right to $2/gallon gasoline, and imagine their political leaders can do something about it (as I once sort of did). But it's mostly a function of the price of oil:
Posted by David Appell at 1/12/2022 03:05:00 PM 3 comments

All Climate Data in One Small Place

Someone should put this on a business card and laminate it, and sell it at climate conferences, teacher conferences, and wherever science is discussed.

Sidney Crosby is a Class Act

Sidney Crosby is the best:

Brian Page, who was paralyzed while playing for the Little #Flyers in November of 2020, gets a puck from classy ⁦@penguins⁩ captain Sidney Crosby. Video: Zack Hill. pic.twitter.com/JKwH328jRT

On the other hand, it's surprising how little you have to do to be labeled a "class act" when you're already a superstar.

Seriously though, I've never heard of a classless thing Sidney Crosby has ever done. 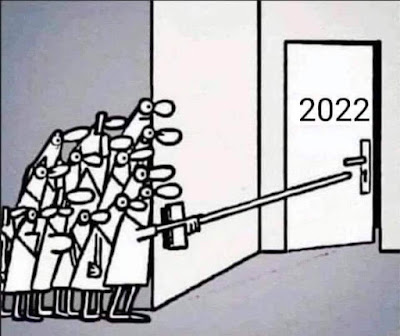