"CO2 is being added to atmosphere by the burning of [fossil fuels] at such a rate that by 2000 the heat balance will be so modified as possibly to cause marked changes in climate beyond local or national efforts."

Apropos of this post, where the comment section turned into an argument discussion of domestic terrorism from the left versus the right, the Washington Post has a story today: "In the United States, right-wing violence is on the rise." They've summarized it in a nice chart; it speaks for itself.

The only thing for it is to run the Jedeye Mind Trick right back at 'em.

Renewable Energy under Trump has Flatlined

Renewable energy use under Trump's watch has now flatlined:

PS: Blogger/blogspot just doesn't render images with much clarity. I'm sorry. If you click on the image it will be clearer, but that's not good enough.
Posted by David Appell at 11/20/2018 07:50:00 PM 3 comments

Quote of the Day

From the NY Times:

I'll assume you know by now the saga of the 10/31 Resplandy et al Nature paper that found a larger uptake of heat by the ocean.

Short story: Nic Lewis found an issue with the paper, but then couldn't refrain from acting unprofessionally.

Longer story via a timeline recap:

10/31 - Media coverage, such as WaPo's "Over the past quarter-century, Earth’s oceans have retained 60 percent more heat each year than scientists previously had thought."

11/6 - Nic Lewis writes a blog post on Judith Curry's site with the title "A major problem with the Resplandy et al. ocean heat uptake paper" -- a big feather in his cap -- also saying he contacted Resplandy.

11/8 - An article in Reason magazine quotes Nic Lewis as saying,


Via email, Lewis responded: "I've had no substantive response from Professor Resplandy, just a non-committal reply saying that they were looking into the questions I had raised and if they found anything that needed correction they would address it. Unfortunately, they have every incentive to conclude that they don't need to take any action! So do Nature; journals don't like being made to look foolish."

(Emphasis mine.) This insult takes the feather out of Lewis's cap.

11/14 - a post on Realclimate.org about their error and correction, by Ralph Keeling, a co-author on the paper, also writing "We would like to thank Nicholas Lewis for first bringing an apparent anomaly in the trend calculation to our attention."

So only two days after he pointed out what he thought was an error, Nic Lewis was already castigating Resplandy et al for not acknowledging his analysis. [Correction 11/21: Lewis says he email Resplandy on 11/1. So it was 5 days before his blog post. This doesn't change my opinion that his 11/8 comments to Reason were unprofessional.] He gave them no-to-little time for analysis, no time to figure out what he was saying or to address the subtleties involved -- Lewis was mostly interested in scoring points.

This paper went from publication to correction in two weeks. (BTW, their results didn't change much; see below.) But that wasn't good enough -- Nic Lewis wanted to do a victory lap on their faces just TWO DAYS after his blog post, when he had no idea if Resplendy et al were considering his argument or not. In fact, they were considering it, carefully. 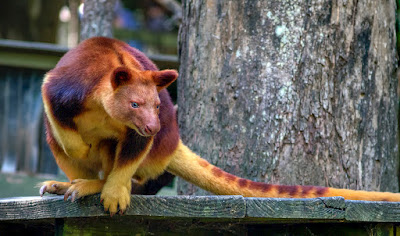 Have CO2 Emissions Declined Under Trump?

Yesterday, or the day before, I can't remember, an NPR story that I can't find now, about plastics and, instead, making bottles from paper, said that US CO2 emissions have declined under Trump.

Here are the 12-month increases in US CO2 emissions since Trump took office in Jan 2017: 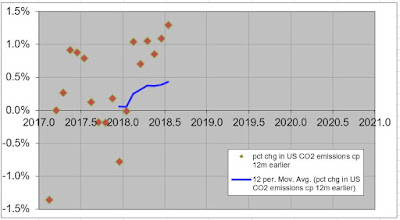 The last six months have shown a clear month/12months-earlier increase in US CO2 emissions. At a rate of about half of economic growth.

Enough to matter? I don't know, how much matters?

Currently US CO2 emissions data go up to July 2018 -- there's about a 4-month lag between now and the latest data -- but already it shows CO2 emissions increasing compared to 12-months before.

I don't know if this is due to policy changes, weather or what. According to my downloads -- which I do in an neverending effort to try to understand what the hell is going on -- the average temperature of USA48 was -1.07°F for March-May (meteorological spring) compared to the same period 1-year before, and +0.47°F for June-July, so far (2/3rds of meteorological summer, so far). Somewhat colder

There is actually a negative correlation between annual US CO2 emissions and the average annual USA48 temperature:

(Sorry, too much trouble to include Alaska and Hawaii. I'm sure they're used to being overlooked.)

So on the basis of temperature we would expect US CO2 emissions to be somewhat higher this year.

PS: That story, which was about replacing plastics with paper bottles (etc), was also sloppy with other parts of the science, I thought.

They noted that plastic was "made from fossil fuels." Yeah, sure. But that oil is sequestered in the plastic (though it might leak out over time. I'm not getting paid enough to figure out how much or how fast).

As well, making bottles of paper requires cutting down trees, and trees sequester carbon. How much carbon is lost after being sequestered in paper bottles? Like making plastic bottles, paper bottles require energy to manufacture.

So what's the complete carbon budget here? Is it enough to matter, considering the US already emits about 5 Gt CO2? As I wrote, it's above my pay grade, which is $0 per whatever unit of time you wish to choose.