In the mail: The Efficiency Paradox: What Big Data Can't Do, by Edward Tenner, published by Alfred A. Knopf, 2018.


Historian Tenner (Why Things Bite Back) argues that supposed advances in technological efficiency can actually be self-subverting in this reasoned antidote to a culture increasingly obsessed with doing more with less. He starts by examining the history of innovations premised on efficiency, first seen in continuous production models such as Ford’s assembly line, and more recently in the rise of digital platform companies, which are “based less on the organization of machines and human labor than the gathering, analysis, and exchange of data.” The book then segues into hot topics such as rideshare apps, GPS, and self-driving cars. Tenner demonstrates how systems such as these, which are premised on efficiency, reduce serendipity, stifle learning, and limit humans’ ability to respond when malfunction occurs; they also, he argues, create substantial lost opportunity cost in the long term. Tenner also addresses the fallacies of big data and how random initial advantages from algorithms (such as Google’s PageRank, which attempts to deliver information that people want rather than what they asked for) can hide the long-term codification of systemic bias. Tenner is no luddite; he evaluates the positives and negatives of technology through a strong base of evidence rather than nostalgia or personal anecdote, and debunks some of the most popular concerns about automation. Tenner’s insightful study of the effects of information technology on society warrants close attention.

Question About Human Vision and Missiles 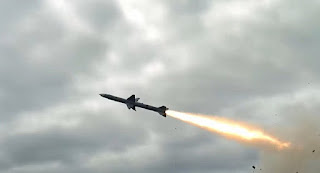 Consider, say, a missile, 5 meters long and 1 meter in diameter. After it's launched, at what speeds could it be tracked by the human eye? What's the upper limit on that speed? Viz., when does the missile become effectively invisible?

(I know the diameter might not be realistic. I just wanted to make it an easy number.)

This is tangentially related to an article I'm working on.

Note added 5/27: I think my query was somewhat ambiguous, because the ability for the eye to track something depends on how far away it is. (Not too far, but not too close.) You can assume any distance you want.... For that matter, make any assumptions you want about size of the object being viewed.... What if the starship Enterprise (or Voyager) dipped into a planet's atmosphere? When could you see it and when would it be moving too fast to catch?

"...James Chadwick, the discoverer of the neutron, had studied physics only because he was too shy to point out that he had mistakenly waited in the wrong line when matriculating."

The data for ocean heat content for the first quarter of this year came out the other day for the global regions 0-700 meters and 0-2000 meters. They're warmer. Recall that changes in ocean heat content are the best way to detect the planet's energy imbalance -- over 90% of the heat trapped by our greenhouse gases finds it way into the ocean.

After some spreadsheet fun I get the following:

Note that the 0-700 m record is almost 5 times longer than the 0-2000 m record, so even though it's about 3 times smaller (in volume) it's not too surprising it's absorbed more heat over its record length.

The uncertainties don't include autocorrelation -- the reality that one quarter isn't independent of the previous quarter, because a warm quarter is more likely to follow a warm quarter etc -- because I'm lazy and because I'm still not quite sure how to include it for the uncertainties of a 2nd-order polynomial fit. (Anyone know? Can you do it quick and dirty by using the effective sample size neff as in equation 9 of this document by Tom Wigley?)

Lots of graphs can be found here. 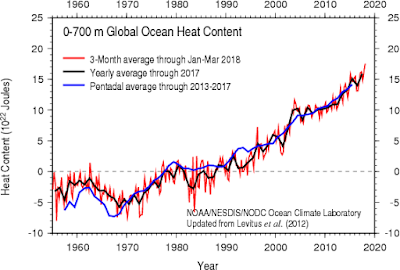 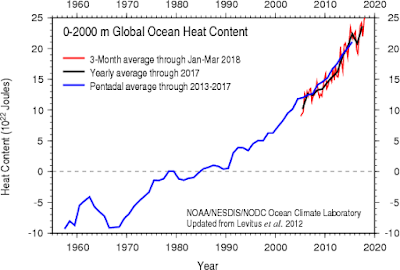 Up until now I thought that global warming would have a significant impact on crop yields, both in the US and elsewhere.

But I've gathered some numbers, and I'm so sure anymore -- at least for US farmers/farming corps.

My understanding was taken from papers like this one:


“With a 1°C global temperature increase, global wheat yield is projected to decline between 4.1% and 6.4%. Projected relative temperature impacts from different methods were similar for major wheat-producing countries China, India, USA and France, but less so for Russia. Point-based and grid-based simulations, and to some extent the statistical regressions, were consistent in projecting that warmer regions are likely to suffer more yield loss with increasing temperature than cooler regions.”
- B. Liu et al, “Similar estimates of temperature impacts on global wheat yields by three independent methods, Nature Climate Change (2016) doi:10.1038/nclimate3115, http://www.nature.com/nclimate/journal/vaop/ncurrent/full/nclimate3115.html

But -- again, for the US -- these turn out to be quite small numbers, because the market sizes are so big and yields are increasing year-after-year.

So how do crop yields (again, US-only) vary with temperature? Here are some data from the National Climate Assessment (2014), Figure 18.3, p 421

These data are, admittedly, rather scattered and a straight-line trend will have errors. (I don't have the underlying data to calculate those here.) But by eye, I estimate the trends to be, for corn: -0.39 t/ha/°F, and, for soybeans: -0.08 t/ha/°F.

OK, now we can put things together.

Let's assume the surface warming trend is +0.20°C/decade. That's one degree Celsius in 50 years. (Results for other trends will scale linearly.)

But in that time, yields will only decrease due to higher temperature by -6% (corn) and -5% (soybeans).

So agricultural technology will, even if trends continue at only a fraction of their current value, swamp any losses due to global warming.

And it won't take much increase in yields in developing countries for them to cancel out any loses due to higher temperatures, either.

Of course, there's no inherent reason to believe that yield increases will continue at their rate of the last 30 years for the next 50 years. Nor will warming stay linear, probably. And we'll need more food to feed ever more people, about 10 B by the middle of this century. And warming won't be limited to just one degree Celsius (we're already at that value anyway).