Anthony Watts is Lying About Me

This implied accusation by Anthony Watts is completely and utterly false. Unfortunately, not the first time he's done such a thing to me.

Happy With my Debate Performance

I'm very happy with my performance today for the "debate" on the Lars Larson show. The hour went by very quickly -- I felt we had barely begun when the show was already half over.

I expected to be more nervous, but wasn't nervous at all. I've never done much of this kind of thing. I actually enjoyed it. I wish it went two hours.

Obviously a show like this isn't well set up for a serious debate of the science of climate change. I knew that going in, and I knew I was being set up as a sacrificial lamb. But that wasn't how I thought of myself, and it's not how I feel now that it's over.

Towards the end of the hour things started to get a little heated, especially during the commercials. Mostly by me. Two things got to me:

- the claim that James Hansen's 1988 prediction was all wrong. It wasn't, once you come what actually happened to his assumptions. But the details, on which science turns, don't matter much in today's forum.

- the setup question about the Medieval Warm Period. It wasn't global, and I said so. Neither Lars or Wiese believed me. But, from the abstract of this big study done by several dozen scientists:

It's almost like facts didn't matter -- despite Lars saying he goes by the facts and the law. (Speaking of the latter, his show's Executive Producer said I would be asked to sign a document giving them the right to the video, but in fact I was never asked to sign any documents, let alone to the video taken after the debate had concluded. I don't regret anything I said there, but I expected to be asked if it was going to be released to the public. No one asked.)

My opponent, Chuck Wiese, an ex-meteorologist in Portland, didn't offer much in the way of science. He is a hard-core denier who thinks CO2 has nothing to do with climate change. That's just ludicrous, of course, and by the end I could barely contain his rejection of settled and well-understood science. And, for better or worse, I let myself loose to argue about how absurd that position was. For example, here is Wiese speaking in 2008 to/for a candidate for the Oregon state senate. If you watch, you'll see Wiese use blackbody formulas on atmospheric CO2. Today I asked him, off camera I think, what was the definition of a blackbody, and he said it absorbs all radiation incident upon it, but then said BB formulas applied to CO2 near its 15 micron absorption. Which is wacky, of course -- you can't use BB equations in a small part of the spectrum, it's the whole spectrum or nothing -- so the Planck Law, the Stefan-Boltzmann law and Wien's displacement formula do not apply to something that only absorbs in a small part of the spectrum or at discrete points of the spectrum. He didn't have any reply to that, let alone a scientific one. I kept challenging him to publish his claims in the peer reviewed scientific literature -- his response was to repeatedly call me an "idiot" -- then he finally claimed that he had published, at EdBerry.com, a blog run by an even worse denier. What can you do?

Nor could he tell us what natural factors were causing modern warming. Because none are known.

So anyway, that's that. The planet keeps spinning, CO2 keeps absorbing, and the planet keeps warming. Because physics says it must.
Posted by David Appell at 6/28/2018 06:22:00 PM 22 comments 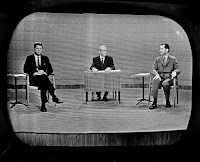 I'm participating in a debate tomorrow about climate change on the Lars Larson show in Portland. It will be at 1:00 pm PDT, on the radio at 101.1 FM KXL Portland -- the audio will stream there as well -- and both the audio and video will be livestreamed at LarsLarson.com and his Facebook page. (Here's a list of affiliate radio stations that carry the show.) Afterward the video will be up permanently at LarsLarson.com.

"I've had a whole career without knowing what quantum mechanics is."
-- Stephen Weinberg, quoted in Lost in Math by Sabine Hossenfelder 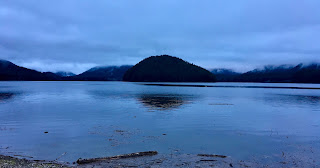 This wild week we've had an emergency situation in the Willamette Valley of Oregon -- the city of Salem (primarily), but also Stayton (where I live now), Turner, and other communities who get their water from Detroit Lake and the North Santiam River it feeds.
There was an algal bloom found in Detroit Lake on May 8th, one that produces dangerous toxins that can cause harm to children under 6 years of age, those with compromised immune systems, and pets. They say healthy adults aren't at risk.
It's been confusing, and the government hasn't handled this skillfully or competently. On Tuesday evening we all got a warning on our smartphones, a noise I'd never heard my phone make before -- a reverse 911 call, I guess -- saying there was a Civil Emergency Alert. That's all it said, very nondescript.
I suspected it was about the water situation, about which the Salem newspaper had sent out a notification an hour or two earlier. (What people without smartphones knew, I have no idea.) But it wasn't really clear -- I did actually wonder for a little bit if the Big Earthquake had hit, or something.
That message was, we know now, a mistake -- an default emergency message sent out by emergency managers or their systems. About 20 minutes later another squawkish message arrived saying it was about the water.
Except the link it directed everyone to, as did my town's (Stayton) Facebook posting, pointed to a cityofsalem.net site that was unreachable, overloaded with traffic.
So there were two big mistakes in a row -- an emergency message that said nothing and so was confusing, and a link to a government Web site that was overloaded.
Not exactly encouraging for when the Big One hits here (the expected M9.0 earthquake).
(For a brief time I did wonder if maybe the first emergency message was about something other than the water situation. It's hard to resist. My biggest worry about the big upcoming M9.0 eq is that it will hit precisely in the middle of January when I am in the shower -- and left not just wet and cold, but disconnected from my eyeglasses, without which I am like Piggy in Lord of the Flies.)
Once everyone was told it was about somewhat poisonous water, the stores naturally had a run on bottled water. (Strike 3?) I was fine with drinking out of the tap, but replaced my cats' water bowl with distilled water, which was all I had on hand. (It tastes lousy, but is at least wet.) Today I was able to replace that with bottled spring water.
The governor called a state of emergency. The National Guard has started distributing free water to anyone who comes to one of their 10 sites they set up around -- though to me they've seemed pretty shy about telling us where those places are (Strike 4).
Oh, and make sure you have containers for the water, because we all happen to have 5 or 10 empty one-gallon jugs lying around, right? (Strike 5.)
Some people have definitely overreacted, but in the last day or so the big stores around seemed to have worked hard to get lots of water into their stores. Like truckload after truckload.
Meanwhile it's come out that Salem officials knew about the toxicity at least four days before they informed the public. Sweet.
Anyway......
The algae bloom was first found up in Detroit Lake -- on the western slope of the Cascade Mountains -- on May 8th. That's relativity early in the season. They have often occurred here in May and June, but have never before shut down water systems.
Now people are asking questions about this algae bloom:


Salem Mayor Chuck Bennett is calling for an investigation into the toxic algae bloom at Detroit Lake blamed for fouling the city’s water supply.

Toxic algae blooms have been a common occurrence at the reservoir east of Salem, which serves as the source of the city’s water supply.

But this year is the first time those toxins have infiltrated Salem’s water supply at levels high enough to cause harm to vulnerable residents.

What might be a factor in the increasing number of algae blooms?


"I think it's fair to say that factors associated with global warming — hotter and drier conditions and a rapid snowmelt — could definitely increase conditions that cause algae blooms," said Rebecca Hillwig, natural resource specialist with the Oregon Health Authority. "There's a lot of factors to consider, but it's fair to say that we have the potential for more of these type of issues in the future."

Salem has warmed about 2.3°F since 1948, and Oregon as a whole (a pretty large inhomogeneous area, to be sure) has warmed by 2.7°F since 1895. I don't have data for Detroit Lake, but I wouldn't be surprised if they're similar.
Maybe at least a few people here will start to grasp what global warming means -- for them personally, if not for the larger world. If not this time, then maybe next. At least it's nice to think so.
Posted by David Appell at 6/17/2018 07:54:00 PM 0 comments

A great night-sky picture from my friend Jim, who I met here in Oregon a few  years ago and got to know, but who then moved to New Hampshire, where he now lives just across Lake Winnipesaukee from where I lived in Gilford for several years in the late 1990s until about 2003! 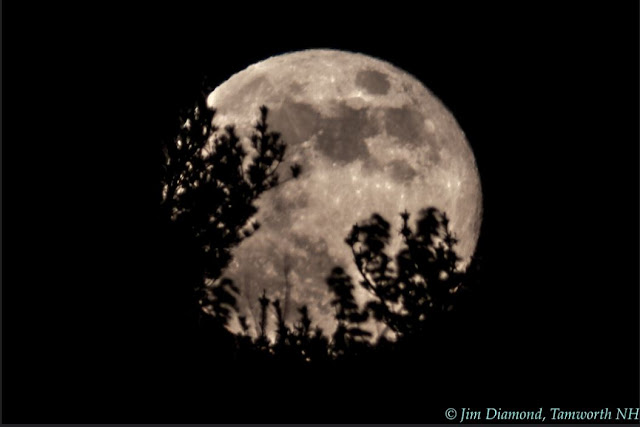