The Ministry of the Future

I loved Kim Stanley Robinson's The Ministry of the Future and recommend it to anyone who is interested in the subject of climate change.

I mean that broadly -- anyone interested in and concerned about climate change and how the world will be affected by it, is going to deal with it and how it will address it. So not just sci fi readers, or climate fiction readers, or KSR fans -- everyone. Robinson is full of ideas about what the future might bring, and he's worth listening to. If I were teaching a class on how we should deal with climate change, I might well assign this book to my students, it's that thought provoking.

The book covers the period from about 2020 to 2050, when the shit of climate change really hits the fan. I'm not going to cover the book in detail -- it's too large. The "Ministry of the Future" is (and this is clever) a UN-formed agency tasked with representing the interests of those not yet born. This happens in the wake of a serious climate catastrophe that takes place in the beginning of the book that I won't reveal here, but which looms over everything that happens after, that makes some (at least) treat the issue as a war.

I think this is perhaps my biggest takeaway from the book. We know -- we know -- what the future will be if we continue on our current emissions pathways. So do politicians. So do oil executives, coal executives, gas executives, business executives, the wealthy of all stripes. They know, these few thousands of people, or tens of thousands on top. But they are actively choosing to exploit climate changing assets for the sake of their own wealth -- actions that will change the climate for untold billions, harm untold billions, alter the lives of untold billions for the unforeseeable future.

Why is this allowed?

In the book, some people decide that it will no longer be allowed, by any means necessary. These people will no longer be allowed to gain obnoxious wealth at the expense of billions now and tens of billions, if not hundreds, of the future. So they, the climate criminals, begin to covertly be eliminated, in their homes, their businesses, their private planes are brought down, their mountain retreats are flushed. Entire units of trained assassins in "black" groups make this their priority until the message gets through. It's not ever clear who is training these black groups, or who sponsors them, if anyone does. Is it the Ministry of the Future? Not officially. No one knows, not even those at the top. Everyone prefers it that way, and looks the other way. Because the tactic works.

Is it too much?

The other most interesting idea in the book is carbon quantitative easing. Basically, the Ministry of the Future convinces the major central banks of the world -- the US, Europe and China -- to give a "carbon coin" to anyone who sequesters a metric ton of carbon. (One small mistake in the book is that Robinson often confuses a ton of carbon with a ton of CO2.) How do they do this? They simply create the carbon coin out of nothing. It exists on a market and can be exchanged at any bank for any currency. It is traded on markets and its value fluctuates like any currency. How do the central banks afford to do this? By creating money in their computers! That's what quantitative easing is. That's what they did in the 2009 financial crisis. That's what central banks do all the time. They create money in their computers and send it to banks to loan. Look at the M2 money supply. It isn't the whole story because money is also created that never makes it into circulation, such as excess reserves. By no means do I pretend to understand all this, but I'm glad those in charge do. I keep trying to understand it but haven't found the right book yet. KSR more or less posits that the carbon QE doesn't lead to inflation, without putting forth a real argument. Or any argument. But then, QE or QE2 after 2009 didn't lead to inflation either, after many people predicted it. This is Paul Krugman's hobby horse, which he loves to ride, while spitting in the face of the inflationists, who, he points out over and over again, were wrong.

I won't give away the ending of the book, or say much more. I also need a new keyboard (having typed most of this several days ago), so can't go any further now. I highly recommend the book.

"At last week’s Alaska meeting between America’s and China’s top diplomats, Chinese officials made it quite clear that they no longer fear our criticism, because they don’t respect us as they once did, and they don’t think the rest of the world does, either. Or as Yang Jiechi, China’s top foreign affairs policymaker, baldly told his U.S. counterparts: “The United States does not have the qualification...to speak to China from a position of strength.”

"Surprised? What did you think, that the Chinese didn’t notice that our last president inspired his followers to ransack our Capitol, that a majority of his party did not recognize the results of our democratic election, that a member of our Congress believes that Jewish-run space lasers cause forest fires, that left-wing anarchists were allowed to take over a section of downtown Portland, creating havoc for months, that during the pandemic the U.S. printed money to help its consumers keep spending — much of it on Chinese-made goods — while China printed money to invest in even more infrastructure, and that gun violence in America is out control?"

The court case of Mann vs Steyn has apparently been dismissed. You can read a heavily biased account by an idiotic climate change denier here.
I don't see any need to go over this. The hockey stick is true. It has been confirmed many times now. It is required by basic physics, and can be proved in a tweet.
Mann has gone on to become one of the most important, recognized and honored climate scientists on the planet, while Steyn remains a Rush Limbaugh wannabe, another cheap purveyor of hate and division. The moral verdict is clear. 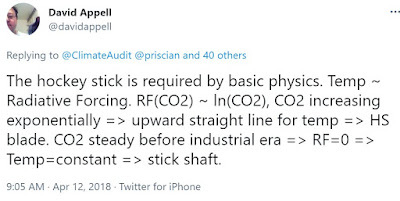 "I hope to die on Mars, just not on the landing."


Blogging is still light, due to my finger splint. Another week at least. Except for small stuff like this. Hope everyone is well. Feel free to discuss anything at all in the comments.
Posted by David Appell at 3/15/2021 01:29:00 PM 7 comments

"A book must be the axe for the frozen sea within us."

Thought I'd look at some recent vaccination rates:
The US is now, in just 6 weeks, at twice the rate as when Trump left office, but no acceleration. The UK is, sadly, beginning to backtrack, and Ireland and Canada are making some much needed gains. I'm surprised Germany is so low for, you know, an economic powerhouse.
Sorry if I missed any reader countries.
Posted by David Appell at 3/05/2021 05:55:00 PM 7 comments

The Ministry for the Future

A short post to say that, belatedly, that if you're interested in the many dimensions of the climate change issue, you have to read The Ministry for the Future by Kim Stanley Robinson. Speculative sci-fi set in our near future, it is chock full of ideas -- scientific, social, economic, cultural, political, policy, activism, and more -- and is exciting in all these dimensions.
I'm about 40% of the way through, so please don't give any spoilers in the comments (also in consideration of other readers). I was on a wait list to buy this -- a splash ad I saw a few months ago said it was the most important book of 2020. Seems it so far to me. Actually, with this and the collection of his earlier work, I think Kim Stanley Robinson should be awarded a Nobel Prize in Literature.
--
PS: Couldn't get new blogger to decently position a picture of the book's cover. Apparently too much to ask. Hooray for Google software updates, supposedly improving mankind one bad release at a time. (Friend of mine: "They're an advertising company, not a software company.")
Posted by David Appell at 3/03/2021 08:52:00 PM 6 comments

Blogging may be slight this week as I dislocated a little finger when I rolled an ankle and fell on the street while getting the mail. Stupid. I let the ER doctor pull it back into place without any pain meds, figuring it would be quick and easy. Took about 5-7 seconds and was quite painful, but I didn't squeal.

The dislocation was on the lower knuckle of the little finger, with the upper bone getting jammed back and around. Ring finger is stiff an swollen too. Hurts like a mother now. [Does that expression come from a reference to childbirth?] Typing's not impossible, just slow -- in a splint. Hope your day was better. Be best. 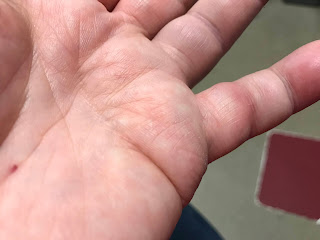