Montana climate denier Ed Berry is proud to be speaking next week at a conference at Porto University, Portugal. But as you can see here, it's just another pseudo conference of well known deniers, organized so they can hoorah themselves and regain a little of their self-esteem. Snowflakes who wouldn't dare present at a real scientific conference.

Zeeshan Aleem at Vice: Time Is Running Out, So Why Aren't Democrats Yelling About Climate Change? No, climate change doesn't work like that (as Chris Colose wrote the other day on Twitter.) There are no deadlines, no thresholds, no final countdown. It's a continuum -- what we prevent now, we won't have to live with (or prevent) later. That's the best than can be said, and done. How many people have looked foolish so far by saying we only have X years to address climate change?
--
, Global ACE -- Accumulated Cyclone Energy -- in August ranked 2nd of Augusts since 1970.

This is probably an unpopular view, but I think cherry-picking evidence, at a certain level of severity, is morally equivalent to fabricating evidence.
— Nate Silver (@NateSilver538) August 30, 2018

Published last year, it's a story about the second American civil war, which in teh book lasted from about 2070 to 2090. Climate change is mentioned often, in and amongst the story. The ocean is rising everywhere, and Florida is mostly submerged. There's a mention of the Bangladeshi isles. Augusta, Georgia becomes a shipping port, and the Mississippi Sea has been created. 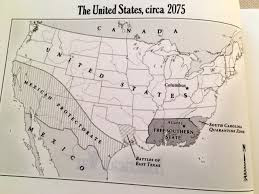 The reason for the war is that several southern states (of course) refused to give up fossil fuels when they were made illegal by the US government -- Mississippi, Alabama, South Carolina. Here's a map at the front of the book: The US is militarily organized; the South consists of several factions -- a somewhat organized military, various groups of freedom fighters, and men and boys who want to be where the action is.

In the beginning of the book, the US (what remains of the 50 states) intentionally introduces a very virulent virus into South Carolina. As a result, the state walled off from both the US and the Southern states.

The story begins by centering on a family in Louisiana. The father goes north to look for work and is killed by a suicide bomber. The rest -- mother, son and twin daughters -- go to live in a refugee camp, still in the South, and suffer the indignities present there.

The novel focuses on one of these sisters, who grows to be physically tall and large, confident, and brave. An undercover agent recruits and trains her to be a lone, stealth fighter for the south, and she goes to the border and kills a prominent general and becomes an folk hero. But she herself is imprisoned on a remote Florida island, tortured, and nearly broken. In the end she commits an abominable act of revenge.

I liked the novel for its science fiction -- how people reacted to climate change, and how it affected living conditions. It's told subtly, not overtly, but it's always looming in the background.
My problem with the book is that I didn't really like the protagonist. She's confident but a bit of a bully. She struck me as emotionally disconnected -- from the time she's eight to her 20s or 30s. There's not much mention of her (formal) education, there's not much interest in other people (besides her immediate family) for their own sake, no mention of any romantic interests. She seems to wander through the book alone and bitter. She shaves her head. Eventually, after prison, she is so broken she sleeps on a dirt floor in a shed, and utterly alone except for a nephew she only begins to connect with. To me she didn't seem three-dimensional.

But it's a book I'd recommend if you like reading about climate change in the future, and how the United States has gone to hell.
Posted by David Appell at 8/29/2018 05:17:00 PM 0 comments

Are there butterflies who flap their wings and so prevent storms and hurricanes?
Posted by David Appell at 8/25/2018 07:18:00 PM 3 comments

OHC numbers for the second quarter of 2018 are in, and they show some significant (but not seriously anomalous) drops:

Big drops. These have happened before, so it's not a big deal. But where did the heat go? (I know, it's a complicated question without any simple answer.) 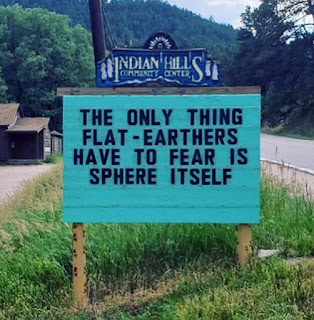 
Just 66 percent of millennials firmly believe that the Earth is round,” read the summary from the pollster YouGov.

I just don't find that believable. It might be a fashionable meme to say. It might be people goofing on the poll. SciAm asked YouGov for the data, and found reasons to doubt the result; although their reading of the data brings the number only up to 82.5% of millenials, and 81.8% for the 25-34 crowd. But then, even though they found problems with the data, they conclude


Clearly, despite the discrepancy between the results, younger people are less likely to agree with the scientifically established view of the shape of the Earth.

They give more reasons for doubt, but still seem to think some fraction of millenials, ~20%, think the Earth is flat. Even 1/5th of them can't be that stupid, right?

PS: Go to the top of Sandia Peak in New Mexico, outside Albuquerque, and look south, west and north. You can see the curvature.

Drought is starting to look serious.  This is the first time I've seen "extreme drought" pop up in Oregon this year. In Salem there's been no recordable rainfall since May. 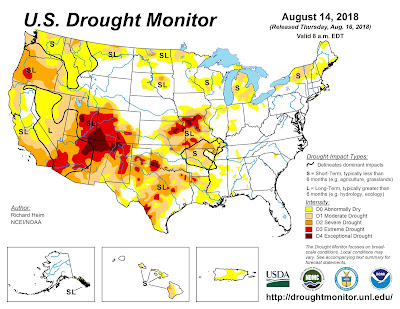 John Fleck has an interesting post about how the ongoing drought in the southwest is forecasted to affect water supplies there. (Though the monsoon has delivered more rainfall there than usual.)Water cutbacks for Arizona and Nevada are expected by January 2020.
Posted by David Appell at 8/16/2018 08:00:00 AM 0 comments

I don't believe evil is some universal substance or essence that infects certain people and causes them to do "evil" things. I think it's actually scarier than that -- it's ideas in all of us that most of us successfully suppress. How do some people fail? Evil behavior seems to be an absolute lack of concern for others, an insistence that one be free to act on anything they want, need or imagine. Robert Louis Stevenson said "we all have thoughts that would shame hell." But why do some people, those who do "evil" things, fail to suppress those ideas and instead act on them? It's an immensely complex question, of course, to which I don't have the slightest answer, as no one does. Perhaps that's why it's imagined as some black nebulous energy field that pervades the universe and, from time to time, invades certain people -- it's the best sense we can make of something so astonishingly senseless. We all wonder what we would have done as a German citizen during the Third Reich. It's easy to say in hindsight, but if we were in that time it's not be so straightforward and easy. Almost all Americans witnessed "evil" (in my opinion) in the separation of parents and children at southern border crossings recently, people we wanted to apply for asylum, meaning they weren't illegal immigrants. The situation drew outrage, but most of us (I mean Americans) watched the situation and did nothing. We assumed someone else would act to defeat this pop-up of evil.

But if anything the report on the behavior of some Pennsylvania Catholic priests is so shocking that its seems evil was widely running amuck. The behaviors are absolutely shocking. These excerpts are all from the NY Times:

These evil acts were committed by men supposedly of God, not by wild-eyed psychopaths or suave operators. (Note: we need better psychopath detectors.) If it happened in any other organization than a church, that group would be shamed and disbanded, the perpetrators (and those who covered for them) frog-marched into police stations and given long prison sentences.

Most of these barbarities happened in the 1960s and '70s, in towns around where I was growing up, such as Greensburg and Pittsburgh. My mother was Catholic who won a scholarship to attend an all-girls Catholic school in Pittsburgh (actually, I think she saw this as the best time of her life), and before she was married thought seriously about becoming a nun. We attended a Catholic church in the nearest town -- not Greensburg, but not far away -- up until I was maybe six or seven. I was baptised in the Catholic church, but never confirmed. I was never an alter boy. I didn't know the priest of our church besides briefly meeting him on the way out. Now I wonder. My father was a Methodist and apparently didn't like Catholicism, so we went to a Methodist church for awhile, which my mother didn't like. By the time I was 10 or so we stopped going to church altogether, which was fine with me. I attended a Bible study class once for a week, which mostly involved long bus rides through hill and dale and me thinking alot about boobs. But I still like going into a quiet, beautiful Catholic church, the way the thick doors and walls block out all street noise, creating a new universe inside with the votive candles alight, an organ playing softly, and voices echoing off the high ceiling and walls. I've attended and appreciated a few Catholic masses on Christmas Eve over the years (and some Protestant services too). But I'm completely irreligious now and don't believe in any of that. How could anyone stay a Catholic after all the abuse scandals over recent decades -- I simply cannot understand that. (Some can't.) The Church has been as immoral as anyone, for decades now -- the utter opposite of what it pretends to be. But you know, I'll probably again sit in a Catholic church for a while and absorb its environment, if the situation arises.

I once saw this in a Steven Weinberg book I was reading -- I forget which -- but it never struck me as much as during the last few days:

California has it highest average July temperature since records started in 1895, and also its hottest month ever. In the last 30 years it has warmed at an incredible +0.35 °C/decade (+0.64 °F/decade).

(Granted, California is large and has several different climate zones. If I get to it I'll look at some specific weather stations.) (But I probably won't get to it.)

--
NASA's Carbon Monitoring System (CMS) has been cancelled, assumedly by the White House. But it hadn't been funded by Congress. It cost $10 M/yr. A scientist said, "If you cannot measure emissions reductions, you cannot be confident that countries are adhering to the [Paris] agreement." But how accurately can emissions be measured from space? I'm dubious.

--
A satellite picture of smoke over USA48, via the HERR model. Via Eric Snodgrass's weekly discussion of Pacific NW weather. (I don't know what the units of the scale are.) 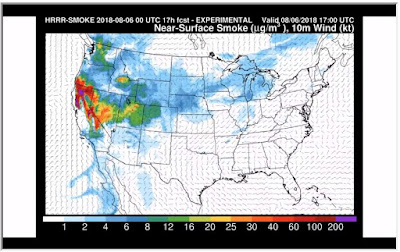 Is There a Plan B? 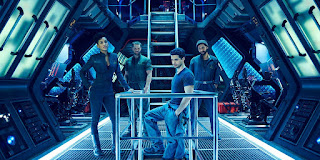 Still no date for The Expanse to appear on Amazon Prime without an extra charge. This fall, is what I've read. You maybe have heard that SyFy cancelled The Expanse in May 2018, after three seasons. But Amazon picked it up a few weeks later and is funding Season 4.

The Expanse gets the top award, in my opinion, for making life in space as compatible with real physics and engineering as any sci-fi show I've ever seen.
Posted by David Appell at 8/04/2018 08:49:00 PM 0 comments