Arctic sea ice extent is now at a record low -- as of yesterday, below even last year's number. This is based on IARC-JAXA data (International Arctic Research Center - Japan Aerospace Exploration Agency.

The National Snow and Ice Data Center (NSIDC) has the same result: 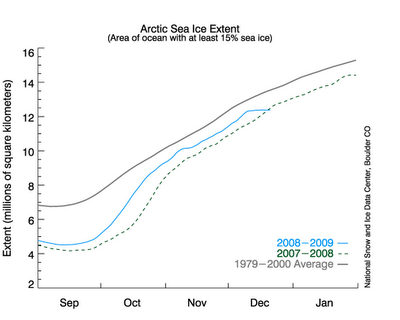 Note: This is ice extent, which is not the same as area (though easier to measure). (For that matter, what really matters is volume, but though I hear people are working on ways to measure that, they're not there yet.)

There are, of course, uncertainties associated with each day's measured ice extent, but the IARC-JAXA site doesn't give them (as far as I have been able to tell). So to within the precision of the satellite measurements, today's numbers are essentially the same as last year's. But the ice extent growth rate is very small in the last few weeks:

Why is this happening? Warmth. Here's the NSIDC commentary from Dec 3 (2008):

The period of very rapid ice growth that characterized October and early November has ended. The rise in ice extent over the past three weeks has been much slower, and should continue to slow until the expected seasonal ice extent maximum is reached sometime in March. Air temperatures over the Arctic Ocean stayed well above average during November, partly because of continued heat release from the ocean to the atmosphere and partly because of a pattern of atmospheric circulation transporting warm air into the region.