Pennsylvania meteorologist Aaron Tyburski says that while the climate in his state seems to be shifting, 100 years worth of data isn't enough to discern why. Let's check back with him in 2112.

--
Philip Lloyd, who heads the Energy Institute at the Cape Peninsula University of Technology in South Africa [where, this reporter writes, "research covers a wide range of energy issues, including studies around climate change"], says, "We have not seen any evidence that the world has gotten any warmer over the past 150 years." The reporter accepted this at face value.

Yet in 2010, Lloyd wrote, “Whether man is responsible (for global warming) is still an open question. Humanity started burning fossil fuels to excess only after 1950. The warming pre-1950 cannot have been driven by fossil fuels. The best guess is that the warming is natural.” [Emphasis mine.]

--
The Oregonian has an interesting article on the engineers behind Intel's new processing chip coming out on Monday.

--
Favorable Oregon laws mean Intel pays no property taxes on its equipment (about $3B), and none on nearly all corporate income. Intel, 2011: net income of $12.9 billion on revenue of $54 B.

Here's the best part: Intel 1Q12: "Revenue: $12.8 billion, plus or minus $500 million." They make so much money they don't even know its amount to the nearest one-half billion dollars. Let's check back with them in 2112.

--
In 2010, Oregon ranked 27th in public school revenue per student, 49th in class size in 2009, and ranked in the bottom third in educational achievement.

On this, there's probably no point in checking back in 2112.

--
Here's Oliver sleeping off some catnip: 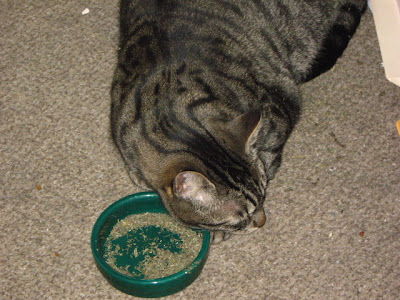