Food Price Increase: Equivalent of $0.32 per Gallon of Gas

Regardless of what's causing the current US drought, it's already having an impact on food prices. The UN FAO food price index shot up 6% last month, though it's still below its peak of a year and a half ago (after the Moscow heat wave of July/August 2010). Cereals increased 17%, and sugar 12%. Meat declined slightly. 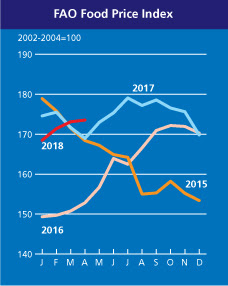 How much does such a jump cost?

The US spends about $700 billion a year on food. That works out to $190 per person per month, so a 6% increase means an additional $11 per person per month. Not too bad, but that's easily noticeable if, say, you're a family of four on a tight budget. I don't know about you, but when I shop for food I'm amazed at how expensive many things are anymore.

On the other hand, that increase is $42 B/yr, or 0.3% of GDP. If gasoline spending increased that much (the US uses about 8.8 million barrels of gasoline a day), it'd be the equivalent of $0.32 per gallon, which no doubt would get Americans steamed. We're funny like that.

Americans spend 6.9% of their budget on food, which is one of the lowest percentages of any nation. These increases are a much bigger problem for the rest of the world:

Much of Africa is, where it can be measured, in the 35-45% range. The blog Civil Eats has more information, and some of the comments indicate some of the subtleties of the situation. If food prices continue to increase like this in the coming months, poor people in those countries are going to suffer.

So it's good to be rich. But being rich means you emit more CO2, and if part of the drought is CO2-induced you just add to the problem. What a mess. Perhaps the bioengineers can arrange for us to feed via stomata.

"I don't know about you, but when I shop for food I'm amazed at how expensive many things are anymore."

I think you accidentally.

I'm amazed at how expensive many things are anymore.

IIRC that is called "availability bias".