You would have thought that James Inhofe had at least two dart boards with Lisa Jackson's picture on it -- one for the office and one for home -- but here's what he released after she announced her resignation as EPA Administrator:


"Lisa Jackson and I disagreed on many issues and regulations while she headed the EPA; however, I have always appreciated her receptivity to my concerns, her accessibility and her honesty.”

Politico said he had a "soft spot" for her. Or maybe he's mellowing in his old age (he recently turned 78). 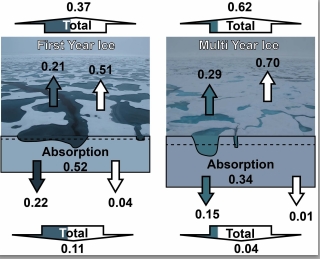 
"Our results show that transmittance through first-year ice (FYI, 0.11) was almost three times larger than through multi-year ice (MYI, 0.04), and that this is mostly caused by the larger melt-pond coverage of FYI (42 vs. 23 %). Also energy absorption was 50% larger in FYI than in MYI."

They write, though, that total solar input depends on clouds, which can change as the Arctic continues to warm, but overall they expect this to be a positive feedback.


"...cheap gas has us idling about half of the existing coal capacity, fooling us into thinking this is progress, and displacing exponential solutions with a fractional one in the guise of being clean and climate-friendly. Not a good outcome for overcoming global warming. Instead of making sound, sober long-term investments in renewables and efficiency that will reap exponential rewards, we are partying it up on a cheap gas credit card with a very high climate-impacts rate."