A few graphs I found interesting from today's press briefing by NOAA on the State of the Climate 2014 -- because you can never have too many summary graphs that extend over several decades.

Reanalysis shows more warming in the lower troposphere in the last 15-20 years than does UAH or RSS (this graph is from UAH's v5.6 dataset, not the latest v6.0beta2, perhaps because the latter hasn't been published yet (as far as I know): 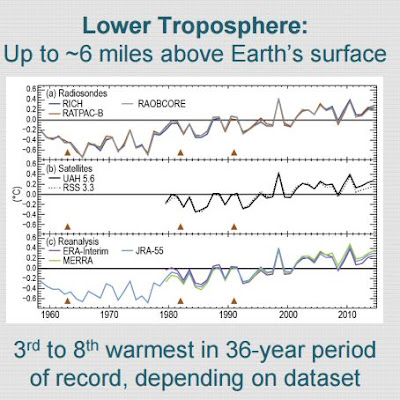 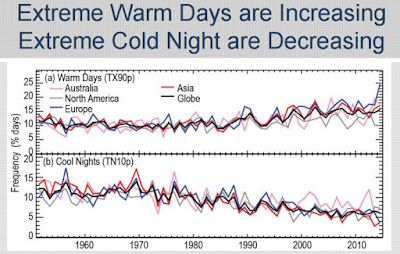 Rise in global mean sea level, with contributions from the increase in ocean mass (mostly from land-based glaciers melting) and from "steric" changes due to the thermal expansion of ocean water. It's about 2-1 for the mass increase, and their sum is the total change in sea level: 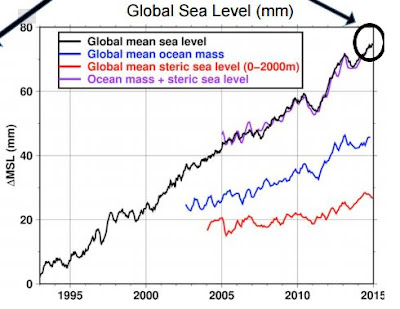 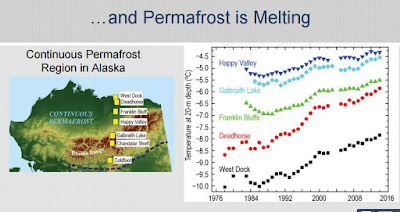 NOAA's prognosis for coming years was (of course): more of the same.

Global sea level changes of 75mm over 20 years.
3 inches over the global seas
With no error bars.
Measurements are that precise?
Really?

Celia: Amazingly enough, yes. Even more amazingly, the measurement is by a pair of satellites orbiting the Earth, called the GRACE mission. Here's more detail:

"The Gravity Recovery and Climate Experiment, or GRACE for short, consists of a pair of satellites moving in an orbit that takes them over the South and North Poles. The two craft, nicknamed Tom and Jerry after the television cartoon characters, send constant signals to each other to determine their relative spacing to about 10 microns -- one-tenth the width of a human hair -- over a distance of 130 miles. If the first craft flies above a slightly more weighty area of the Earths' surface -- like a mountain range -- it will be tugged a bit out of place, an effect picked up by a change in the relative spacing of the craft."