The latest data on sea level rise from AVISO is now starting to show a positive acceleration.

I'll dice the data in two ways; both show an acceleration:
First, here are the sea level data from AVISO: 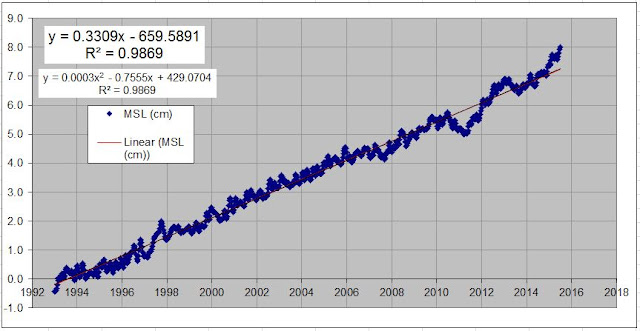 The second-order polynomial fit shows an acceleration of 0.005 ± 0.009 mm/yr2, where the uncertainty is calculated assuming no autocorrelation.

That's still small, but it's been increasing steadily since the 2010-11 La Nina that took a lot of water from the ocean and dumped it on land -- which Josh Willis called correctly and Bjorn Lomborg called wrong:

This fit finds that the current rate of sea-level rise is 3.83 mm/yr.

The second method, calculating the change in the linear slope of the last 20-year's worth of data (20 being picked arbitrarily) finds an acceleration of 0.021 mm/yr2. (Sorry, I haven't calculated its uncertainty.) 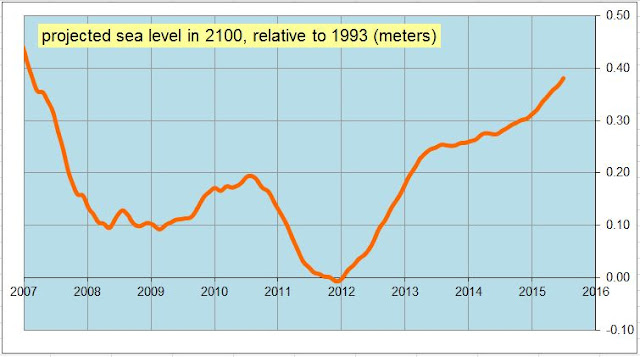 One last number, since it gives me the opportunity to use my favorite unit, the Sverdrup (Sv), which equals one million cubic meters per second: the change in the volume of the ocean from land ice melting + water thermal expansion is 0.04 Sv, or almost 21 times the flow of water over Niagara Falls.

That's more than twice the average discharge of the Mississippi River into the Gulf of Mexico (= 0.017 Sv).

Reject the notion that we must always consume more.

Yes, that WILL change "the economy."

But the choice is a changed economy or no economy.

Technology, in major part, brought us this problem.
See Craig Dilworth: "Too Smart for Our Own Good."

John -- who do you mean by "we"? Are you talking only about middle class Americans? Billions of human beings live in squalor. They want the benefits of technology. I don't see how you can morally deny them these benefits. Poor people in Africa and Asia can become richer and healthier mostly by the use of energy fossil fuels. Solar and wind and nuclear can help some, but the main improvement in their lives will come from fossil fuels.

In order to end the growth of atmospheric CO2, we would need a new source of immense amounts of energy that's no more costly than current fossil fuels.
David in Cal

On Monday the WSJ had a special section on Energy. In it was an article about those getting access to electricity in West Africa. It says, "Rooftop solar power is becoming cheaper in many African countries than buying from the national grid," and without the blackouts that plague the system.

As of this year, 33% of Africans live in countries where rooftop solar is now cheaper. This is expected to increase to 54% by 2020.

Fossil fuel infrastructures are expensive, and require a lot of engineering and bureaucratic skills to install, operate and administer. Rooftop solar will probably be the answer for many Africans, and Indians too.

To David in Cal:

Do please drop the morality of dealing with the poor BS.

You act as though the solar, wind and nuclear energy technologies, not to mention fossil fuels, that would improve their lives, were invented 20 minutes ago.

The squalor of billions is/has been caused by centuries long creation/exploitation of said poor by those who consume 5-times any objectively determined fair share of the world's resources.

Yes, I'm talking about the middle class (and higher) of the US, Europe and the equivalently wealthy wherever they consume as a matter of right and "economic patriotism." That's at least 1.5 billion, roughly one-fifth of the world's population. That is the maximum proportion that can continue to consume at steady 5-fold levels. To those who think they must always consume at a HIGHER rate add China and India to the striving consumers club, another 2.5 billion, at least.

If there is anything less likely than dropping the notion that we must stop worshipping consumption growth, or bringing affluence to the billions in squalor, it would be finding new sources of "immense amounts of energy that's no more costly than current fossil fuels."

There will be no moral sharing with those who must live in squalor so we can "prosper." There will only be more wars to steal their resources. Then will arrive the extinction of our very technologically clever, if suicidally illogical, species.

PS: The chronically incorrectly assigned money "cost" of fossil fuels, in terms of both finite supply and CO2-caused "externalities," has been a large factor in creating the current problem. The CO2 aspect is well discussed. But the need to get fossil fuels from fracking, deep sea/Arctic drilling and oil shale/sand extraction (e.g. Keystone) all suggest we are rapidly approaching the point at which any energy recovered is exceeded by the energy expended to recover it. This is the only relevant economy.

Excellent article. I appreciated the link to the article "When oceans drop". There's a great write-up by Stefan Rahmstorf on the dangers of fitting quadratics to sea level to get the acceleration: http://www.realclimate.org/index.php/archives/2012/11/dont-estimate-acceleration-by-fitting-a-quadratic/

Perhaps you've already seen that. I was curious myself as to what the proper way is to determine acceleration in a noisy set of data. By following links in Rahmstorf's paper and searching on the internet, I finally found a Matlab version of the single spectrum analysis code that Rahmstorf supposedly used. You can find it here:
http://www.glaciology.net/software/ssatrend-m

I haven't started playing around with it myself, but perhaps you can give it a try on the satellite data and see how well it does.

Thanks Joe -- I've been hoping to learn more about how to determine acceleration and will check out your link.

David, I should add one more thing. If you go here:
www.sciencemag.org/cgi/content/full/315/5810/364/DC1SOM
then you can find a zip file that has all the codes and data that Rahmstorf used to calculate acceleration. If you open up his code sealevel.m then you can see that he indeed says he uses the code ssatrend that I pointed to before. He doesn't include ssatrend in his zip file however, but I pointed to it before.

Of course, all of this is useful only if you already have Matlab.

That link to the Rahmstorf zip file should have been