Lord (or Somebody Real), Please Help Us

This shows the damage deniers can do when people -- like Trump -- have no critical thinking skills. Trump reportedly got all worked up over a fake Time cover claiming that scientists once said an ice age was at hand. From Politico: 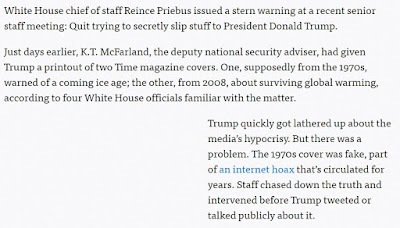 First, what kind of dummy is K.T. McFarland, deputy national security advisor, and -- well, we already know, don't we? -- what kind of a idiot is Trump? 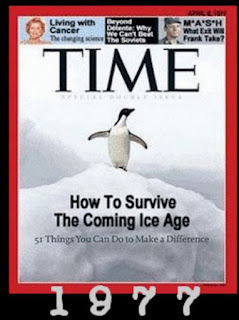 I don't know who made it -- but they probably got a bonus this week for it.

By the way, as far as I'm concerned the definitive study on this claim is from Thomas Peterson, William Connolley and John Fleck:

From this paper's abstract:

An enduring popular myth suggests that in the 1970s the climate science community was predicting “global cooling” and an “imminent” ice age, an observation frequently used by those who would undermine what climate scientists say today about the prospect of global warming. A review of the literature suggests that, on the contrary, greenhouse warming even then dominated scientists' thinking as being one of the most important forces shaping Earth's climate on human time scales. More importantly than showing the falsehood of the myth, this review describes how scientists of the time built the foundation on which the cohesive enterprise of modern climate science now rests.

How dysfunctional is Trump? Reportedly he can't read more than one page of a national security briefing, and like a twisted narcissistic child, he has to see his name mentioned as often as possible.

One unnamed source told Reuters that since Trump “keeps reading if he’s mentioned” in briefing materials, officials on the National Security Council have learned to insert the President’s name into “as many paragraphs as we can.”

Charles Pierce at Esquire refers to Reince Priebus as 'The obvious anagram', which had its origin during Pierce's appearance on Steven Colbert, who coined it. "Crisp bee urine", if you need to know.

If it's true that Trump prefers one-page memos, that's OK with me. Ronald Reagan liked one-page memos. He won the Cold War, while avoiding nuclear disaster, and he began a long period of growing prosperity. An article in Harvard Business Review said:

Ronald Reagan was famous for asking for one-page summaries and today many executives follow that example. It is good practice because it challenges the petitioner to reduce his idea to its barest essentials as a means of ensuring understanding as well as developing a platform for advocacy. This methodology is something that I have coached executives to ask for as well as to develop for themselves.
https://hbr.org/2010/04/avoid-over-simplifying-your-on

P.S. Trump has weaknesses as a President, but his achievements show he's not stupid or incompetent. Earning billions of dollars and developing a hit TV show didn't just happen accidentally.

And Reagan's 'simplicity' was really duplicity, with his usual distortions. Don't forget the duplicity behind the timing of the release of the Iranian hostages; almost surely done in collusion with the revolutionists before the 1980 election. And repeated perjuries regarding the Iran-Contra deal.The great communicator was the Great Prevaricator.

You're relying too much on Breitbart.

OnymousGuy - A President is generally given credit or blame for good or bad things that occur during his Administrations. That rule of thumb applies more strongly when the achievement involves military and foreign affairs -- two areas that are directly under the control of the President.

I would add that the myth that Republicans are dumb has been used against them for many years.

Eisenhower was supposed to be dumb, even though he graduated from West Point and guided the Allied victory in Europe. And, after he left office, it was discovered that he had shrewdly worked behind the scenes to undermine Sen. Joseph McCarthy.

Gerald Ford was supposed to be dumb, even though he graduated in the top 25% of his class at Yale Law School. And, also had a quite successful Presidency.

Reagan was supposed to be dumb, but his record of achievements speaks for itself. And, collections of scripts he had written for his weekly political addresses showed that he had a keen understanding of political issues and he had a knack for explaining the issues. (See https://www.amazon.com/s/ref=nb_sb_ss_c_2_22?url=search-alias%3Dstripbooks&field-keywords=reagan+in+his+own+hand&sprefix=reagan+in+his+own+hand%2Caps%2C206&crid=3GAV8WHEXCVJ7 )

George W. Bush was supposed to be dumb, despite graduating from Yale and earning a prestigious Harvard MBA degree.

So, the claim that Trump is dumb is just normal Democratic mud-slinging.

Sarah Palin was supposed to be dumb as well. I hadn't heard that about McCain or Romney though... Are you sure that this is your vbest and brightest?

Hello, I am Theresa Williams After being in relationship with Anderson for years, he broke up with me, I did everything possible to bring him back but all was in vain, I wanted him back so much because of the love I have for him, I begged him with everything, I made promises but he refused. I explained my problem to my friend and she suggested that I should rather contact a spell caster that could help me cast a spell to bring him back but I am the type that never believed in spell, I had no choice than to try it, I mailed the spell caster, and he told me there was no problem that everything will be okay before three days, that my ex will return to me before three days, he cast the spell and surprisingly in the second day, it was around 4 pm. My ex called me, I was so surprised, I answered the call and all he said was that he was so sorry for everything that happened that he wanted me to return to him, that he loves me so much. I was so happy and went to him that was how we started living together happily again. Since then, I have made promise that anybody I know that have a relationship problem, I would be of help to such person by referring him or her to the only real and powerful spell caster who helped me with my own problem. email: drogunduspellcaster@gmail.com you can email him if you need his assistance in your relationship or any other Case.

1) Love Spells
2) Lost Love Spells
3) Divorce Spells
4) Marriage Spells
5) Binding Spell.
6) Breakup Spells
7) Banish a past Lover
8.) You want to be promoted in your office/ Lottery spell
9) want to satisfy your lover
Contact this great man if you are having any problem for a lasting solution
through drogunduspellcaster@gmail.com

I said Reagan was duplicitous. The word 'dumb' never appeared in my post. You should look at a dictionary.

And David in Cal, you are apparently unaware of the CIA's own assessment of the end of the Cold War.