Deniers like to believe there are reasons why a decline in the Sun's irradiance will lead to another ice age -- it's not true -- and one of their favorite papers is by H. Abdussamatovhttp://www.ccsenet.org/journal/index.php/apr/article/view/14754/10140, which I don't think has even been published anywhere.

I've written about his claims before, and took a look again today. Abdussamatov is even more wrong than he was a year ago. 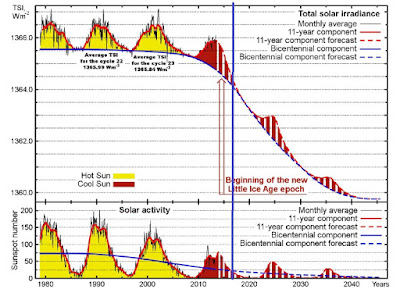 The vertical blue line on this graph is the present. According to Abdussamatov, the "new Little Ice Age epoch" should already have started.

Which link to use for the latest TSI? This, I guess. It's hard to know. Good luck trying to figure that out.

Their FTP site was written as if this was 20 years ago. I can understand how back then the WWW was new, as was expecting scientists to post their data.

But in 2017? No way. Wake up, PMOD, and make your data easily available to the people who are paying for it.

Anyway, here, as best as I can determine, is PMOD's latest TSI data:

Omitting quantifiers can lead to overly broad criticism. It would have been better if David had written, "Some deniers believe..."