Major New Discovery Using the Principle of Nikolov and Zeller

I've made a "major discovery" -- for the five solar system objects considered by Nikolov and Zeller, their Principles show that an object's Global Mean Annual near-surface Temperature (GMAT) is exactly determined by its radius. 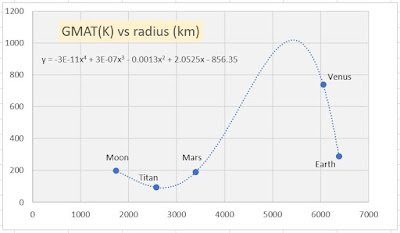 And I only used five free parameters. Their model uses six.

Eli Rabbet has a nice post about the games Nikolov and Zeller are playing. Nikolov is all over Twitter proclaiming their "new discovery," which is nothing more than curve fitting with almost no physics involved. ≧ 2 can play at that game.
Posted by David Appell at 12/11/2017 12:04:00 PM

You should get that published! Although you probably have to write a whole lot of garbage around it, to package it into something that appears to be science.

Be sure to include that your model is only valid for planets with atmospheres that have IR emission properties, but then conclude that IR emission had no bearing on surface temps or your model.