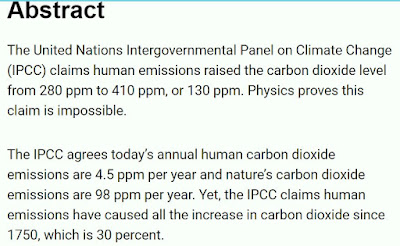 Berry's argument appears even stronger when one makes the correction. He would say that man's 4% contribution of annual CO2 emissions couldn't cause the CO2 balance to grow by 46%. However, his whole argument is flawed IMHO. I believe a small increase in annual CO2 emissions could cause a large increase in the CO2 balance in the atmosphere. The key is the rate at which CO2 is removed from the atmosphere.

Yes David, thanks. In fact, Nature has been absorbing *more* CO2 than it emits, so that about 1/2 of man's emissions are also absorbed by nature. Atmo CO2 is growing at about 2 ppm/yr.

This isn't guaranteed to continue, but it is the case now and has been for awhile.

And it still proves that Ed Berry is an idiot.

This paragraph provides clear idea iin support of the new vusitors
of blogging, that in fact how tto do running a blog.

His PhD is not from Caltech and his work has been contributed to textbooks. Amazing how someone's education and career doesn't make their politics just like yours. If you are really about debunking lies, start by being credible yourself. Did you scour the internet looking for the slightest shred of information that you could twist into oil shillery? Surely you can create it if you can't find it anywhere.

It seems to me you are misinterpreting what Ed Berry is saying. The percentage change may be 46% but the amount of CO2 increase post 1850 is only 31% of the total amount of CO2 in the atmosphere. To claim that Ed Berry made a fundamental mistake in arithmetic is incorrect. His calculations are correct. total amount is 408 ppm. Increase is 408 - 280 ppm = 128 ppm. The percentage therefore is 128/408 x 100 = 31%. That is the percentage of CO2 increase in the atmosphere today.