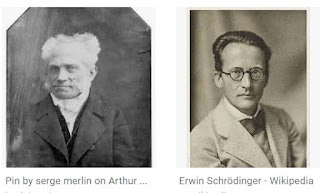 
“The task is…not so much to see what no one has yet seen; but to think what nobody has yet thought, about that which everybody sees.”

And there are variations on this, such as "Discovery consists of seeing what everybody has seen and thinking what nobody has thought," "Genius consists of..." and "Research is...."

But today, when I was trying to find out where Schrödinger said or wrote this, I found that he doesn't seem to have written it at all.

There are hundreds (about 680) of Google results that attribute it to Schrödinger. Wikiquote says Schrodinger said it, and so does the author Brian Greene.

But googling around I began to see attributions to the philosopher Schopenhauer, and then to the physiologist Albert Szent-Györgyi.

So who gets credit? Schopenhauer, I believe. This site, devoted to investigating quotes, written by a guy who says he wrote a best selling book on such investigations, finds


In 1851 Arthur Schopenhauer published a two volume work written in German titled “Parerga und Paralipomena” which contained a collection of long essays together with a series of short numbered passages. The piece numbered 76 included the following...."

I'm not going to go look up the original reference -- I doubt I'd find it in the original German anyway, which I can't read anyway. And while I don't agree that it takes so much more to be a philosopher than a physicist(!) -- at least I can kind of understand the physicists -- this is some good evidence that the words, or something essentially identical to them, came from Schopenhauer and not Schrödinger. Poor Schopenhauer only gets about 25 Google returns for it.

So now I have to go all over the Web correcting everyone who said it was Schrödinger. I'll return to blogging in 2020 when this task has been finished.

Interesting philosopher, Arthur Schopenhauer, first to see links between Western thought and Budddhism. Disciple of Kant, but struck out on his own. Hated Hegel, and despised his philosophy, but not a nice man in many ways. In an altercation with an elderly woman who had disturbed his thinking, she fell and became permanently disabled. He had to pay her a pension until she died, but never expressed any regret. OTOH, he influenced Wagner, Nietszche and Wittgenstein, but no, he was not an antisemite. A prolific writer of aphorisms, he could well have originated many quotations assigned to others, as he is remembered today only by specialists.