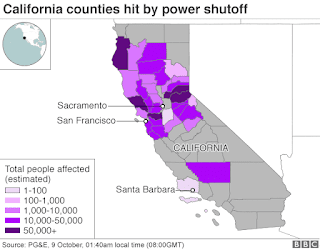 If it comes to a dystopia this will seem one early step down the road. Power companies in California are shutting off power to 800,000 people in 31 counties because of the potential for wildfires in the current windy, dry conditions.

That's difficult to believe, but it started today at midnight -- about 513,000 customers without power in 22 counties. A second phase starts at noon today for another 234,000 customers, and the remainder later. Officials don't know how long it will last -- it could be several days, as they inspect every inch centimeter of their power lines .

There have actually been two previous shutoffs this year, one iSeptember and last weekend, but on a much smaller scale (just three counties). I haven't read about what the impacts might have happened for those.

But this seems kind of crazy. Just imagine: no hot showers. No hot food. Everything in your refrigerator could spoil. No easy way to charge your cell phone (you can always do it in your car, assuming you have one). No use of medical equipment like CPAP machines and ventilators. No Internet, unless perhaps if cell towers are still working. Street lights? Presumably hospitals already have generators, but what about grocery stores and gas stations? How many businesses will this close temporarily? It could well have an effect on California's GDP. Schools are closed in the Bay area.

I realize big wildfires are dangerous (especially when power companies aren't properly trimming the conditions around their lines), with winds tonight in the Bay Area expected at up to 65 mph. but cutting power like this seems almost as dangerous.

Anyone in California affected by this? (DiC?) Does it seem as difficult, even scary, as it looks to me?

PS: And there's this:


Pacific Gas and Electric Co. diverted more than $100 million in gas safety and operations money collected from customers over a 15-year period and spent it for other purposes, including profit for stockholders and bonuses for executives, according to a pair of state-ordered reports released Thursday.

Presumably because of the way they got sued last time.

Yep, I’m anticipating power outage at 8:00 tonight, and because I live in a relatively low-populated area (Santa Cruz mountains) restoration will be a low priority and so could take a week. This is not due to conservative safety standards, but to the aforementioned substandard maintenance due to PG&E skimming those funds to pay executives and stockholders.

Tom, sorry to hear that. When you get power back, I'd be interested in hearing about your experience.