NOAA found the anomaly for the global mean surface temperature to be 0.93°C; NASA found 0.92°C, both were records for July in their respective datasets. And since July is the warmest month of the year, that makes July 2021 the hottest month in recorded history -- since 1880. OK, it was warmest only by 0.01°C. But a record's a record. 0.01°C a year is 1°C a century, after all, nothing to disregard in itself. It was hot in many places, and at least warm almost everywhere, except in the US midwest and south and in southern Africa: 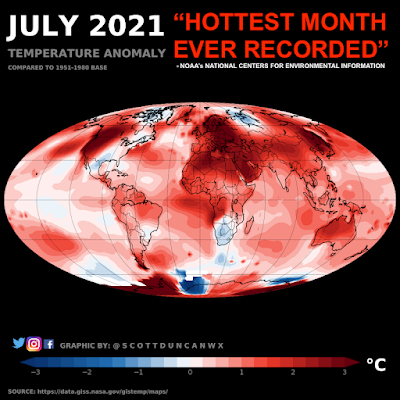 Not surprising to see big excesses in the Western US, in Europe and in East Asia.

The real surprise is to see Western Antarctica so warm.

Canada is headed to the polls for a federal election. The main opposition to the incumbent liberal party is the Conservative government led by Erin O'Tool.

The plan includes scrapping the federal carbon tax and working with the provinces to implement an innovative, national Personal Low Carbon Savings Account. This will maintain a price on carbon, without one penny going to the government, recognizing that Canadians are the ones who should be choosing the best way for them to live a greener lifestyle.

The plan includes several other measures, including:

This sounds like a big government approach, especially when you dig into "what is a Personal Low Carbon Savings Account?"

Instead of rebating the estimated cost of fuel charges to residents when they file their income taxes -- which is how consumer carbon pricing works under the Liberals' program -- the Conservatives said under its plan, money would go into a tax-free savings account.

"Not a cent goes to Ottawa," said O'Toole.

Sign up here to receive The Climate Barometer, delivering climate and environmental news to your inbox every week
The party said the accounts would be managed by companies similar to how a debit-card system works. The plan says it would work like other loyalty rewards programs, so that over time users would save up money to buy products that help them a "live a greener life," such as a bike or transit pass.

The liberal rebates can be spent however you like. It's cash. The Conservatives are looking to restrict how you can spend your rebates - only on "green" products and services.

This is such a clunker of a plan. Who wants the government telling them how they can spend their money? Why would a conservative government think this is a good idea?

It seems they are between a rock and a hard place. Canadians are largely interested in making progress on climate change as the country burns, but there is no room to the right of the Liberal's carbon tax and dividend policy.

Yeah, that sounds like a plan big government thinkers would come up with, not conservatives. Maybe they're trying to introduce a plan that's too complicated to work or do any good(?), to confuse the situation and ensure fossil fuels keep flowing....