This is from page 1 of Michael Mann's book The New Climate War. 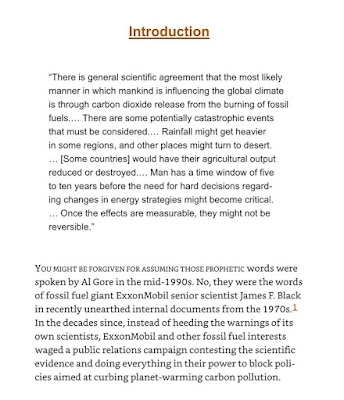 The original source is Inside Climate News.

Michael Mann's book is excellent, and I heartily recommend it. He dissects the information war that has been going on for decades now, waged by the fossil fuel industry. But he also gives it to those who are all doom-and-gloom, the "Deep Adaptation" people who think all that's left is for us to prepare for the collapse of society. Mann's position is that we can still cut emissions enough by 2030 to prevent serious problems, with enough activism and political will, and that's his message in the book and in the talks he's giving seemingly everywhere.

I wish I were that optimistic but I can't say I am. I just can't see the world getting it together, primarily because of corruption driven by the multi-trillion dollar fossil fuel industry. (Just today I saw a tweet by Senator Elizabeth Warren about an army of Exxon lobbyists on Capitol Hill.) There's far too much money to be made for them to go quietly, or to transition into energy companies that produce renewable energy. They're making token efforts at best: 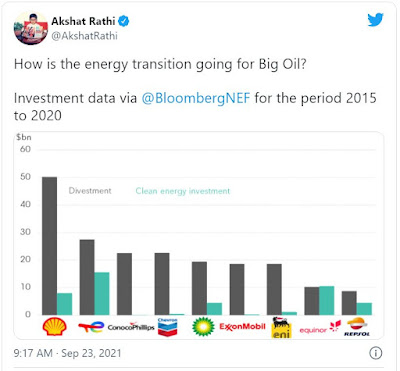 But who cares about me--a lot of young people aren't very optimistic either: 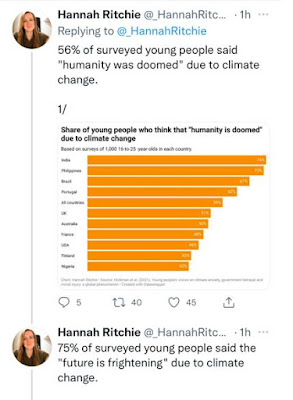 which is incredibly sad. And infuriating. OK, I worried a lot about global nuclear war when I was younger, between about 25 to 35, and would occasionally jolt upright in the middle of the night yelling from a dream, scaring the hell out of girlfriends in the process. Maybe my subconscious thought humanity was "doomed," but I outgrew it (but am rather surprised there hasn't been a global nuclear war in my lifetime--I would have bet there would have been. There's still time for one, of course. but I no longer wake up screaming at night.). But climate change seems a different order of disaster, because it looks inevitable. No attempts at a solution have done anything to modify the exponential Keeling curve--not Kyoto, not Copenhagen, not the Paris Agreement--and it's difficult to believe it will happen now at COP26.

So why be optimistic? I don't see it yet. Does anyone?

"So why be optimistic? I don't see it yet. Does anyone?"

Things are better than they could have been, but not nearly as good as they need to be. We are making progress with renewable technologies. We're still just planting the seeds, but I'm optimistic about the exponential growth we're seeing in fossil fuel alternatives.

If there's one thing watching Covid cases has shown me it's that the time between "Hmmm. It looks like somethings happening here" to "Oh wow... what just happened!" is relatively short when the curve is exponential. :)

Further to your point about slowing CO2 emissions, I did a change point analysis on CO2 emissions recently and found that since 1970 emissions have been doubling every 25-30 years or so (except during the 90s after the fall of the Soviet Union when the doubling time was 50 years). Since 2012 however emissions are doubling every 100 years. That's a huge change, while GDP growth, which bounces around year to year, is increasing roughly 3%/year. Emissions look like they are starting to decouple from economic growth. At least part of the reason is the exponential growth in renewables.

The bad news is that even if CO2 flattens out and remains steady, we're still looking at 3C above pre-industrial by the end of the century.

Joe, that's interesting, thanks. I'm going to have to learn how to do change-point analysis. I saw a tweet recently, which I wish I'd saved, with several graphs showing a decoupling of GDP and CO2 emissions for several economies.