Killing the "Cooling Since 2002" Meme

The driver of the climate clown car is trying to cook up a new meme, based on this unfortunate Judith Curry post -- global cooling since 2002.

Of course, it isn't true when you look at the entire Earth, but it isn't even true if you only look at the surface -- neither cooling nor warming is statistially signficant in such a short time period.

Here's the trend since 2002 for the GISS global surface temperature: 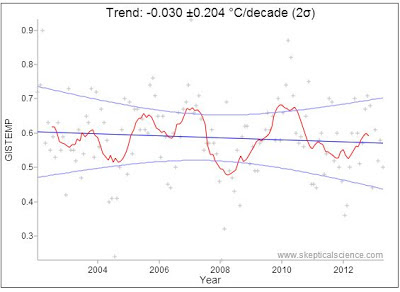 The uncertainty is huge. There is simply too much inertia and too much noise in the climate system to say anything climatologically meaningful over such a short time period, which in this case is heavily influenced by two La Ninas near the end of its interval.

I don't, of course, expect anything like a commitment to the truth from Morano, but certain other people ought to know better.