Krugman Does It Again

And he has an almost school-boyish, smartest-kid-in-the-class aversion to ever being called wrong: 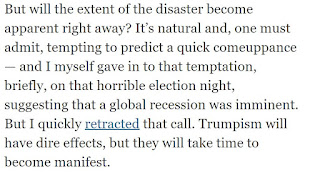 But he's sure in the long run Trump will be a disaster. I'd like to think so too, but it's not clear to me at this point. Already he is showing signs of compromising his campaign promises -- on the wall, on the Affordable Care Act, on a Muslim ban, and on same-sex marriage.

Anyway, Krugman says Trump will bring "runaway climate change." If he means "runaway" in the scientific sense, a la Venus, he's wrong -- the Earth isn't close enough to the Sun to undergo such a runaway (but only by a few million km). Even if we burn all the fossil fuels available -- about 12,500 Pg carbon, according to Swart and Weaver 2012 -- we'd get 9 to 33 C of warming. Serious shit, but not runaway.

Maybe Krugman thinks Trump will keep us on RCP 8.5. Probably, but the world is on that anyway. Nothing the US can do individually to stop it, and I don't see the US killing the Paris agreement alone. If anything there might be some retaliation. I hope there is -- that's the best way to enforce a global carbon tax.