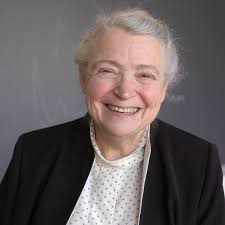 I'm sad to see that physicist Mildred Dresselhaus has died, at 86.

I profiled her for Scientific American way back in 2002. She was the first scientist I profiled for Sci Am, and when I sat down with her somewhere in Boston, I told her I was a little nervous. She said, "Oh come on, don't be silly."

She immediately made me feel at ease. After that the interview went really well.

She did a lot of work on carbon nanotubes, describing them, understanding them, classifying them. I probably didn't write enough about her work in advancing women in science -- she was the first woman to hold a full professorship at MIT, in 1968 -- but then, I saw her as a very good scientist, with nothing to do with her gender. Perhaps I was naive. Or perhaps that's the way it should be.

The NYT says she published more than 1,700 articles, and won a host of medals. I assume that is the number of papers she was either lead author on or a co-author...which is immensely impressive by any measure. My impression was that everyone thought very kindly of her. She was old enough to have been in the olden, golden age -- she worked under Fermi, lived in the same neighborhood and even walked to work with him. Oh for those days. That's as romantic as it gets, scientifically.

I feel a second-hand personal connection. My wife is friendly with her daughter. A chemist friend was getting her Ph.D. at the University of Chicago when Dresselhaus was doing her physics studies there. They were friends at that time.