Trump Only Play is Playing Everyone for a Fool 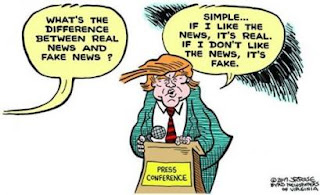 This morning I was driving for about an hour, spewing CO2 the entire way, and other pollutants as well, even daring to exhale, leaving rubber on the road, and I listened to most of Trump's press conference via an astonishing device that somehow plucks electromagnetic waves right out of the air.

It was flabbergasting, and frankly insulting that my country (let alone mine) has such a dick for a president. (And I didn't choose that word lightly.) Trump so clearly knows nothing, and covered it up by repeatedly lying throughout the press conference. And the dumbest part is that he thinks no one else knows he's incompetent and dishonest, viz. that his methods are working.

All while he's being laughed and exclaimed at, under their breath, by everyone in the room.

Instead of answering any questions, Trump would immediately shift to how terrible the White House leaks were -- during the campaign he loved leaks, especially about Hillary -- or moreso, how terribly "dishonest" the media are.

If only Trump spent as much time on governance as he does researching cable news ratings, he might -- might -- be passable as a politician.

The NY Times clearly isn't failing, and Trump's continued use of the word "failing" ambly reveals his insecurities about them.

But the problem is deeper than this, I think.

Trump is attacking the very roots of society. Trump is actively -- for no other reason than his own selfish, authoritarian purposes -- attempting to label all media news as "fake news." Or at least the news reports he doesn't like, that don't portray him favorably.

Instead of confronting the reportage, as any mature person would, he just dismisses it as "fake" and immediately starts whining about the media. And those the words that fill up his press conference. Instead of talking about whether anyone on his campaign staff did talk to Russian officials, and WHILE THE RUSSIANS WERE HACKING John Podesta's emails -- he tries to make it about how "dishonest" the media is.

And he thinks this actual childish response somehow works.

I don't want a president -- or any representative -- who tries to play me for a fool. Trump is already the disaster most smart people thought he would be. Once people would have stormed the White House with pitchforks. Why are we who know better supposed to simply watch for the next four years while Trump assaults everything that is decent and values about this country?
Posted by David Appell at 2/16/2017 10:52:00 PM