Here's a nice, meaty result you can sink your teeth into: A paper in the AGU journal Global Biogeochemical Cycles tries to add up the cumulative carbon emissions from changes in how humans use land.

Mostly this means clearing land by cutting trees and bushes. Trees and bushes take up carbon as they grow, and release it to the soil and atmosphere when they die and rot; but they also seed new trees, which sequester carbon and the cycle goes on. Etc.

So cutting down trees without replanting them is an effective (viz. real) release of carbon to the atmosphere.

This paper finds that land use and land cover changes have lead to emissions of 145 ± 16 Pg Carbon (1 standard deviation).

(For some reason, scientists who research the carbon cycle use units of petagrams of carbon (Pg C), where 1 Pg = 1015 g. Most people would call this a gigaton (Gt C), unless they work in climate policy where they use megatons of carbon dioxide (Mt CO2) or its equivalent (Mt CO2e)).

{Aside: Maybe before Marching for Science, climate scientists could at least agree on common units for communicating their science to the public. And decide whether time increases on the horizontal axis to the left, or to the right.}

Here's their time series for each of 10 regions of the planet: 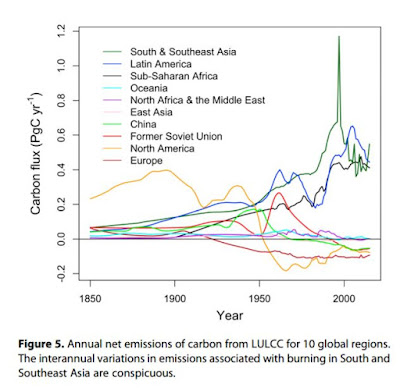 The bump in the orange line is all the trees Americans cut down to built their country. (Look at civil war photographs and notice the relative dearth of trees, especially compared to today. Notice that during the last half of the last century North America has actually been gaining trees. So has Europe.)

The increasing green line, on the other hand, is from the burning of peat lands in Asia and southeast Asia, because the 1998 El Nino brought dry weather to Indonesia.
Posted by David Appell at 4/19/2017 12:17:00 AM