Sea level rise is up 25% since the 1990s, according to a new paper in GRL, mostly due to melting in Greenland. From an AGU blog:

From the paper's abstract:


The new GMSL [Global Mean Sea Level] rate over January 1993 to December 2015 is now close to 3.0 mm/yr. An important increase of the GMSL rate, of 0.8 mm/yr, is found during the second half of the altimetry era (2004–2015) compared to the 1993–2004 time span, mostly due to Greenland mass loss increase and also to slight increase of all other components of the budget.

Here is their final result, after all bias corrections: 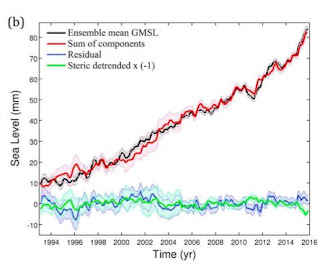 which clearly is increasing faster than linear. The paper doesn't actually give a value for the acceleration -- it obviously depends on the times chosen -- but I'll try to estimate it.

The two observation periods are Jan1993-Dec2004 and Jan2004-Dec2015 (yes, there's a slight overlap; I don't yet know why). Their midpoints differ by 11 years, so the acceleration is about

where "SLR" is Sea Level Rise. This is about what I get from fitting the Aviso-only data to a quadratic, as I did here, which now comes to 0.06 mm/yr2.

Added 4:40 pm -- I went ahead and calculated the uncertainty for this acceleration, given the uncertainties in the paper (which are only 1-sigma). The 2-sigma error for the acceleration is quite high, 0.27 mm/yr2.

It's high mostly because the error on the first interval's SLR is high, 13% -- and that's only 1-sigma. I have to read more to figure out why.