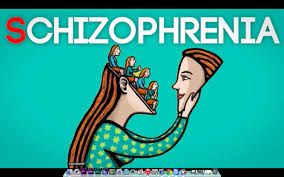 I heard about this last week when driving from an FM radio DJ on a music station I listen to.

I thought it was a new scientific finding, but it turns out it's almost a decade old. In any case, I found it fascinating and it's stuck in my brain since.

As you know, people with schizophrenia often hear voices and see hallucinations. I was involved with a women for several years who was a home health care manager, and she would tell me about the mentally ill in the homes she supervised who saw eyes in walls or heard voices, and she convinced me it was something very difficult and sad to have to live with.

I'm sad to say that I have never actually known anyone with schizophrenia.

What this FM DJ talked about -- in the laughing, jovial, kind-of-thoughtless ways that DJ's speak in -- was how people with schizophrenia who are born deaf "hear voices." (I don't like calling them "schizophrenics," since schizophrenia does not encompass who they are -- they are not the disease, but people with the disease.)

They see, in their minds, disembodied hands in their internal mind vision that are signing words.

How amazing is that?


Participants born profoundly deaf reported non-auditory, clear and easy to understand voices. They were all confident that they did not hear any sounds, but knew the gender and identity of the voice. They reported seeing an image of the voice signing or lips moving in their mind.

I wonder what people born blind with schizophrenia experience.

This really fascinates me. Over the last few years I have been trying, for reasons I'm not going to get into here, to understand my mind better, why I am the way I am, and how experiences long ago have shaped me. I've always been smart, in a rational and logical way, but have been trying to look beyond that, because that certainly doesn't explain all of me. I've never had an especially high emotional quotient -- E.Q. -- I think, which to me seems as important in life as an I.Q. Maybe more important. And I've come to believe that one's mind -- the psychological state that somehow results from all our organic brain matter and cells and neurons -- is a seriously complicated place. It's obviously elevated our species to a high status, relative to others here (at least in some ways that seem important as we define them), but it's by no means perfect. Getting our minds to here has also included a lot of mental junk, properties of our minds that aren't necessarily advantageous -- schizophrenia, depression, neuroses, anxieties, sometimes OCD (which I actually have about corners -- I often feel that I need to touch them, on furniture especially, and I've had this impulse for a long time, thought it's by no means disabling). We get the good -- fantastically superior (relatively), useful minds, with understanding, foresight, creativity -- with the bad -- mental defects, mental illnesses, glitches, "negative" aspects.

Our minds are amazing things, maybe the most amazing thing in the universe (however egocentric that sounds), but they have by no means evolved to be perfect. Evolution gets the job done -- or we wouldn't be here and who we are -- but not perfectly, not cleanly, not with complications.

This deafness/schizophrenia study struck me in this regard. Their minds get the job done, maybe (?) in a less-than-average way, in terms of staying alive, etc., but the beast refuses to be simple, is full of disadvantageous thoughts (I guess -- they seem so) that in some ways are necessarily indigenous to our organic brain matter, that must accompany the good. Does that make any sense?

All I'm trying to say -- I guess? -- is that brains are terribly complicated things, putting us atop the heap of all other brains -- but also slippery and maybe even evil little bastards that we must schlep around if we want the good parts. I don't know.

That the mind can be so clever/sneaky as to convince people with deafness and schizophrenia that hands are signing in their mental vision, the disease trying to express itself no matter what the obstacles, kinda spooks me. What else is in there?
Posted by David Appell at 7/03/2017 08:17:00 PM

Dave, you ask "I wonder what people born blind with schizophrenia experience." People with schizophrenia are not particularly prone to visual hallucinations. I am ready to be shown to be wrong, but this was what psychiatrists argued against Hoffer and Osmond, who were impressed with the similarities between the LSD trip and schizophrenia. Which was a pity, because it closed down an important avenue to understanding psychosis.