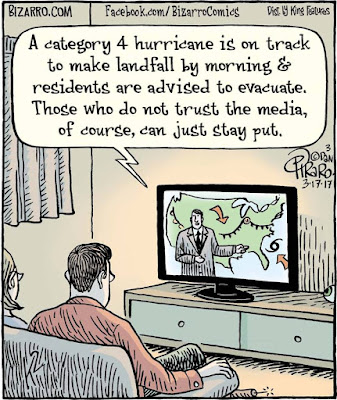 This cartoon is ironic, because the media did indeed get it wrong. It wasn't their fault. They were just reporting official projections. Still, the fact remains that media reported a Saffir Simpson Category 4 storm on track to make landfall, but the actual landfall was a Category 1. Nevetheless, the storm is extremely dangerous because of all the flooding. So, the media were right about that.

Here's a different case, where the media were definitely guilty of exaggerating the force of the wind. It's a funny viral video, which embarrassed the Weather Channel. https://www.youtube.com/watch?v=kjFU-hz0KrU

"The media" were guilty of exaggerating that wind?? Or that one correspondent of that one channel was guilty of it?

We need to demand more from the media. Ever seen Kellyanne Conway answer a question honestly rather than deflect, divert, or lie? Why do we keep listening to her? What's the point?

I guess that's what sells. Bob Dylan had it right. They’d just go off the stands in a day if they printed really the truth.