Here's a figure that was posted to Twitter the other day -- the world's non-fossil fuel electricity isn't even yet back to its 1995 peak: 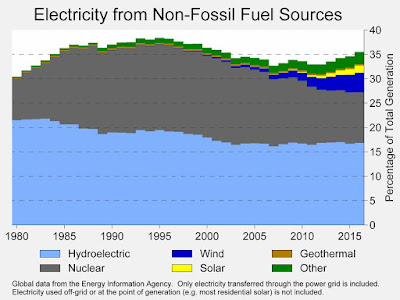 Berkeley Earther Richard Rohde called his chart "depressing," and added his this take on it: 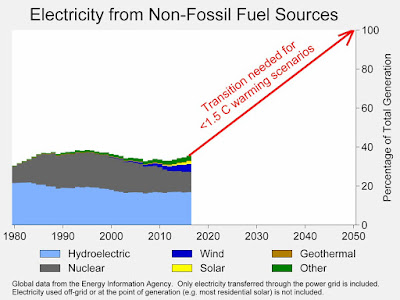 Clearly limiting warming to 1.5°C by 2050 requires either a significant new innovation(s) or a quick change of attitude among world leaders. It's difficult for me to see the latter happening -- the money in fossil fuels is just too large, the political corruption just too rampant -- so the former is really the only hope left. And that doesn't look to be anywhere on the horizon.
Posted by David Appell at 2/28/2019 12:54:00 PM

We've adjusted our course and are once again headed in the right direction... cup half full?

Hopefully. But that red line keeps getting steeper every year.

David, An interesting feature of the Rohde graph you showed is that renewables are barely keeping up with the shutdown of nuclear reactors. One of Rohde's other graphs shows that the countries that have the largest percentage of electricity from sources other than fossil fuels either have enormous amounts of hydroelectric power (Norway, Iceland) or have made significant investments in nuclear energy (Sweden, France).

I'm a plasma physicist and have spent my career trying to help develop fusion as an energy source. Despite the astounding success in understanding basic physics of hot plasmas, I've come to the unfortunate conclusion that fusion will have little impact on the climate problem until the end of the century or so. Whereas I used to be opposed to nuclear fission plants, lately I'm reevaluating that position. A month ago I listen to Joshua Goldstein lecture on nuclear energy and just finished reading his and Qvist's new book, "A Bright Future: how some countries have solved climate change and the rest can follow".

What are your thoughts on building nuclear (fission) reactors?

I would suggest a stronger word than "depressing". Maybe "bleak" or "grim" or even "hopeless". Current conservation and green energy efforts are not going to be sufficient. IMHO this chart tells us that we need to focus on two areas:

1. Mitigation - Acknowledge that global warming is going to happen. Put more a lot more money and effort into improved infrastructure, changes in agriculture, and whatever else can to be done to live on a warmer planet.

2. Development of new energy, such as improved fission or controlled fusion or something not yet invented.

David, in #1 you mean adaptation, right, not mitigation?

Are we prepared to see half of Florida go underwater by 2100?

I am in favor of building more fission plants. Like you, I once wasn't, due to the waste disposal problem, but that seems secondary now to halting/reducing climate change. Use fission as a bridge to more sustainable energy sources. Build lots of wind and solar, but I think you're right, fission has to be part of the solution -- the numbers just don't add up if not.

Shortly before he died, Wallace Smith Broecker said it was time for humankind and the world’s scientific community to begin to seriously study more extreme solutions to the climate crisis. That included creating a massive solar shield in the Earth’s atmosphere, a tactic known variously as "geoengineering," "the sulfur solution," “solar radiation management" and the "Pinatubo Strategy.”

“If we are going to prevent the planet from warming up another couple of degrees, we are going to have to go to geoengineering,” he said. The price of continued inaction, he added somewhat ominously, could be “many more surprises in the greenhouse” known as Earth.

I am fearful of the unintended consequences of geoengineering, but IMHO Broecker is correct that our current efforts to encourage using less fossil fuels are not going to be sufficient to reverse the growth in atmospheric CO2.

To solve the climate problem, policy must be based on facts and not prejudice. Alongside renewables, Nuclear will make the difference between the world missing crucial climate targets or achieving them

Nuclear power, particularly next-generation nuclear power with a closed fuel cycle (where spent fuel is reprocessed), is uniquely scalable, and environmentally advantageous. Over the past 50 years, nuclear power stations – by offsetting fossil fuel combustion – have avoided the emission of an estimated 60bn tonnes of carbon dioxide. Nuclear energy can power whole civilisations, and produce waste streams that are trivial compared to the waste produced by fossil fuel combustion. There are technical means to dispose of this small amount of waste safely. However, nuclear does pose unique safety and proliferation concerns that must be addressed with strong and binding international standards and safeguards. Most importantly for climate, nuclear produces no CO2 during power generation.

One of the people I tend to follow in this discussion is Jesse Jenkins of the Harvard Kennedy School. Here's a lecture he recently gave on the decarbonization of electricity and the GND.
https://www.youtube.com/watch?time_continue=1&v=F3YMlzK8d0o

A certain amount of the green "Other" consists of American trees that are shipped to Europe and burned there to generate electricity. According to the linked article in Vox, the process does not help fight global warming.