More Nuclear: Andrew Sullivan has an article about nuclear power in New York Magazine. (He's for it.) I just noticed it and having read it yet.... But I see that he repeated the claim that the cost of the New Green Deal is estimated to be $93 trillion, which is crap ridiculous. (Most of that estimate is due to the costs of the social changes it advocates -- job guarantees, livable wage, etc. But still.)

--
Cold and wet: NOAA says the average USA48 temperature for February was in the lowest third of Februarys in their 125-year period. It had the second highest February precipitation, only 1/10th of an inch below 1998's record.

Here, Salem, Oregon had the coldest February in 30 years and the 7th-coldest February on record (since 1893). Eight days with snow, which is very unusual.
--
Record electricity: US electricity use set a record in 2018, was up 4% compared to the year earlier, largely because, the EIA says, a colder winter and a warmer summer. Cooling degree-days and heating degree-days both show signs of a warming temperature trend: 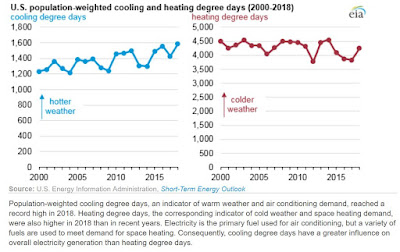 Here's another interesting graph. I'm guessing (?) the peak in industrial electricity, and the transition around 1980, is mostly due to the transition to a service economy: 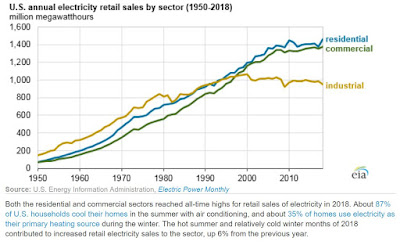 --
Another hockey stick: In Greenland, from an article by Carbon Brief that also debunks an old Don Easterbrook graph that has wormed it's way through the Web. (I'm sure there will be a retraction any time now.) 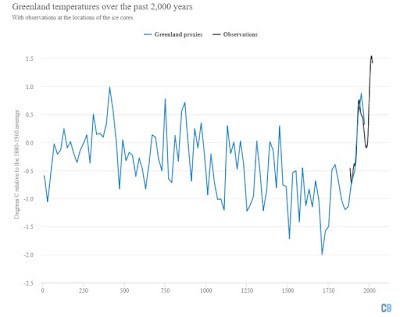