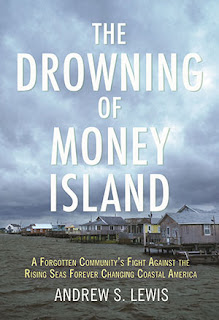 I think the press has caught on, because I'm seeing more and more stories about east coast towns and cities dealing with sea level rise. The other day was this NYT story about Virginia Beach saying no to developers that wanted to build new homes in more frequently flooding wetlands. Today is this well crafted story and video by Tom Horton at Yale e360 about a community, Money Island, on the Delaware Bay in southern New Jersey.

The video isn't embeddable, so you'll have to go there to watch it. But it's worth the 15 minutes. It's a very visceral portrait of real people dealing with the economic and emotional consequences of the rising sea level that is slowly drowning their much loved community. Trump should watch it.

New Jersey's Blue Acres program has been buying out homes there, about 300 of 1500 in five years, after the devastation of Hurricane Sandy in 2012. This is going to happen along coasts everywhere -- it will be taxpayers who make home owners whole, because the homeowners can't be expected to just write off the value of their largest asset. It also shows how the demise of these communities will accelerate once it begins, as their tax base erodes as people begin leaving and the land left behind turns into tax-exempt open spaces. (Money Island has lost $15 million off their tax base so far.) That leaves less money to deal with the effects of rising tides on roads and other infrastructure. It's a downward spiral.

> New Jersey's Blue Acres program has been buying out homes there

Why should the taxpayer subsidise idiots who bought homes in stupid places? This is exactly the sort of thing that should be discouraged.

In many places they bought homes a few decades ago before there was any (public) awareness of sea level rise, or had homes passed down to them by family. It's probably not fair but it seems pretty clear to me that taxpayers will pay for these homes as they are abandoned. Homeowners have a lot of political clout and these make for good (and sympathetic) stories in the press. It will probably cost ~$trillion this century in the US alone.