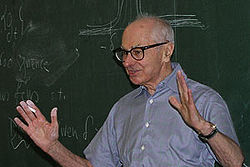 Besides being a great mathematician in (but not limited to) number theory, Serge Lang was an activist who spoke out on a great many topics. For example, in 1971 he resigned his position at Columbia University to protest their treatment of anti-war protestors without having another job lined up. (A year later Yale offered him a position). He also disliked the use of sloppy mathematics in the social sciences -- for example, he successfully lobbied (twice) against a membership in the National Academy of Scientists for Harvard political scientist Samuel P Huntington, who used pseudo-mathematical arguments to prove that 1960s South Africa was a "satisfied society." In an earlier protest (1981) of the 1979 book The 1977 Survey of the American Professoriate, he wrote this, which is not just very elegant but unfortunately seems exponentially more relevant today in all areas of society:


I don't like the nonsense that passes for rational discourse so often in our society. I am very much bothered by the inaccuracies, ambiguities, code words, slogans, catch phrases, public relation devices, sweeping generalizations, and stereotypes, which are used (consciously or otherwise) to influence people.

I am bothered by the inability of many to recognize these for what they are. I am bothered by the way people fudge issues, or are unable to clarify them, sometimes because they are inhibited by "collegiality" and other forms of intimidation (sometimes subtle, sometimes not). Most people put up with the nonsense without doing anything about it (unable or unwilling, for whatever reason - inertia, lack, of energy, lack of interest, lack of time, etc.), often falling into cynicism and despair.

I am bothered by the way misinformation, disguised as scholarship, is used in social, political, and educational contexts to affect policy decisions.

I am bothered by the way misinformation is accepted uncritically, and by the way people are unable to recognize it or reject it.