So far the spreading of the Wuhan coronovirus -- the scientific label is 2019-nCoV, n for "novel," as in new -- has been on an uncannily tight exponential:

The data have a doubling time of just 2.0 days. Of course, it's early still, and this kind of increase can't continue forever. (If it does, the entire population of the planet will be infected by March 7th of this year.)

And the number of deaths is relatively small, at least so far: 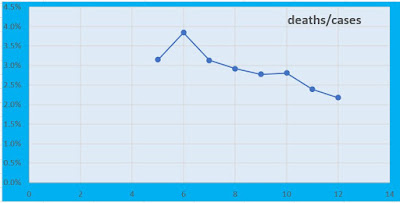 which accords with the "2-4%" number I heard this morning on NPR. But the epidemiologist they interviewed this morning said we should be much more worried about the flu:


BRANDON BROWN: Last year we had 34,000 deaths from the flu. The year before, we had 61,000 deaths. And this is just the United States. So the one thing that we should really be focusing on right now is the flu. We're in the flu season.

I can easily believe that. I had the flu in early 2001, as a healthy adult, and it was the worst illness I've ever had in my life. I was completely bedridden for two weeks, and out-of-sorts for another two weeks after that. (Thanks to my girlfriend-at-the-time Ann, who took very good care of me.) But if I get the same when I'm 70....

I have been very sure to get a flu shot every year since.

Another doctor they interviewed said:


MICHAEL ISON: The mortality for MERS was about 34%. Mortality for SARS was about nine to 10%. And currently, it's somewhere between two and 4% for this novel coronavirus.

AUBREY: That's an estimate, and it could change. But the bottom line for those of us who live in the U.S...

ISON: The risk of catching flu is exponentially higher than catching the novel coronavirus.

So as usual the media are missing the message, and unduly creating panic in the meantime.

I understand that a new disease with no known cure or vaccine is scary. But it's a matter of risk, which the media by-and-large never communicate well.
Posted by David Appell at 1/29/2020 02:43:00 PM

I do not really agree with the last comparison. At the moment the normal flu is more deadly. But if we would not do anything 25 million people would be dead after March 7th. That is more than a normal flu season. It is only not much of a problem if we contain the problem, like the ozone layer, the Y2K bug or climate change.

Victor: Fair enough. But I'm not proposing doing nothing about the Wuhan virus, and indeed, health organizations around the world are doing quite a bit. Just saying we need to keep it in perspective relative to other risks.

I will keep the risk in perspective. Your post is the second I read about the virus. The Germans are highly interested, in Germany you become ill become someone infected you. I am Dutch, in The Netherlands you become ill because your immune system failed. (A slight exaggeration to highlight an interesting cultural difference.)