I think it's often worth pointing out evidence of basic predictions and expectations for anthropogenic climate change, and here are a couple, both from "Vapor Storms" by Jennifer Francis in the November 2021 issue of Scientific American:
The increase in water vapor, as a result of a warmer atmosphere: 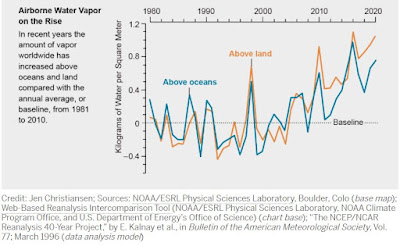 By the way, there's 1.27e16 kg of water vapor in the atmosphere, on average, or an average of 24.9 kg/m2. (That's 0.25% of the atmosphere's mass, or 3,970 ppm by mole. Interestingly, that's only equivalent to 2.5 cm (1 inch) of equivalent sea level rise.) So an increase of about 0.9 kg/m2 (as it looks from the graph, weighting between land an ocean) is 3.6%. Half the predicted 7% per °C of warming predicted by the Clausius-Claperyon equation. Not sure why.
Increase in extreme rainfall in the US: 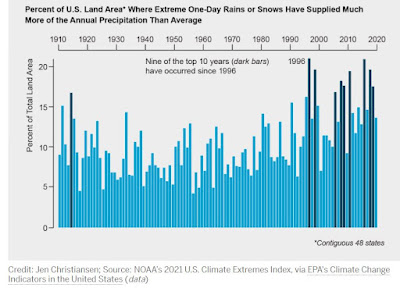 So this is a positive feedback, correct? Can we quantify the forcing created by this extra water vapour?