This coming cooling in the next decade predicted by Keenlyside et. al in the May 1 Nature is really good news, but unfortunately the politicians and public aren't smart enough to realize that so it could well turn out to be very bad news. 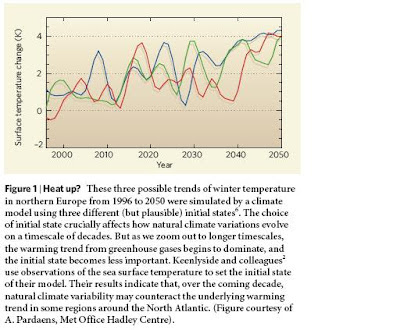 Global warming skeptics will be jumping all over this, despite their previous attempts to denigrate climate models at every turn.

-- "Don't Fight, Adapt; We Should Give Up Futile Attempts to Combat Climate
Change," Open Letter to the Secretary-General of the United Nations, National Post, Dec. 13, 2007.

Anyway, this latest news is good news because, if it turns out to be true, it means we have more time to get out civilization carbon-free.

But it's bad news because, of course, our politicians and public can barely look a month into the future, let alone a half-century, without being beaten over the head with deadly heat waves in France and warming records set every other week. They simply don't/can't/won't understand that the long-term predictions of climate science are far more important than the short-term predictions. Greenhouse gases still warm the planet. If you steadily increase their concentration, they will warm the planet, and it will take a long time to overcome that.

"The closer you look at something, the more complex it seems to be."

Having read the paper, I think the media have misreported this story. We may have several more years of insignificant warming, but it catches up right quick.