...what surprises me is that more people haven't been making the connection between the Burma cyclone and global warming. That kind of talk was all over the place after Hurricane Katrina even though it made little sense in that case. In the end, Katrina made landfall as a strong Cat 3 hurricane, hardly a superstorm, and the bulk of the damage to New Orleans was done not by Katrina itself but by the breaching of poorly built levees. That had nothing to do with global warming.

By contrast, the Burma cyclone really is a good example of the kind of thing we're likely to see more of in coming decades.

It's not at all clear that this cyclone is a consequence of global warming, and no one will ever know, and it's scientifically and intellectually wrong to make such an attribution.

The 1970 Bhola cyclone in East Pakistan killed up to 500,000 people. Was that a consequence of global warming? 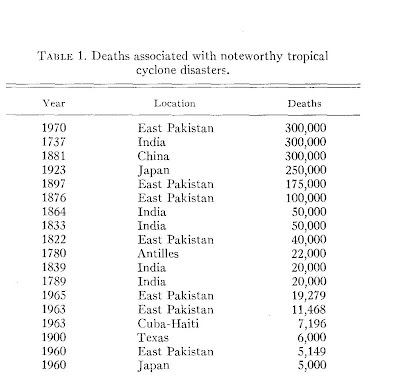 If you want to attribute this Burma cyclone to global warming, please tell us why you do not associate any of these other past, big cyclones with global warming?

Were all these cyclones a consequence of global warming? Of course not. Cyclones happen. Even worse cyclones that we just saw in Burma. Will they be more likely in the future as the world warms? Perhaps. Probably. But they would happen even if the world wasn't warming.