Dennis Avery has published such a stupid error that, frankly, it ought to end his career.

Avery is the kind of conservative jack-of-all-trades that media outlets insist on using despite the availability of tens of thousands of more qualified scientists.

Opining on climate science, Avery wrote, in something called the American Daily:

have declined since 2004. How can this be when humans keep emitting more greenhouse gases? Could declining atmospheric CO2 levels mean that the whole Greenhouse Warming theory is collapsing?

They're bound to cover up such a ridiculous claim, so here's the screen print: 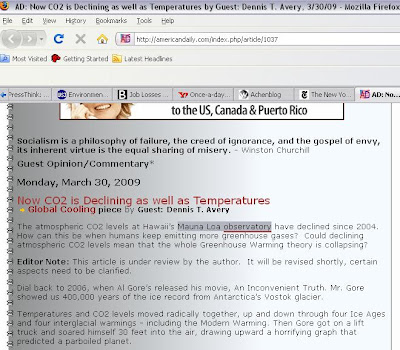 Of course, this is beyond ridiculous, and so silly that a 7-year old wouldn't make it. Yet this is what passes for skeptical punditry on climate science these days.

Here is the actual data from Mauna Loa -- it took, literally, four seconds to Google this. Atmospheric CO2 levels continue to increase (of course), just as they have for years.

No legitimate author could write this, even in a first draft, and no legitimate editor could possibly sign off on it. Avery's reputation ought to be in the shitter after this. What do you want to bet that lots of places will still publish him and supposedly legitimate outlets like World Have Your Say will continue to host him. How sad.

Well you were right, it is gone, but not silently: *Apologia: I deeply regret my misstatement that CO2 levels are Mauna Loa were declining. They are not. Nor is there clear evidence that the increase in atmospheric CO2 is yet slowing. In the past, I have demanded a higher standard of evidence than I had for the first edition of this column, and will return to that policy.

Yes it does seema bit off that he reported those figures. Must have been a late night for him...I guess people make errors like using september temperature figures for october and then claiming that october temps are higher than every before.....hmmmmm.

Everyone makes mistakes although this seems like a pretty big one. I met Dennis Avery before and spent some time with the guy. He is well spoken and intelligent. Needless to say, I am slightly surprised that this error made it onto a website.