The extent of sea ice in the Arctic appears to have peaked for the year, at 14.4 M square-kilometers.

How does this compare to previous years?

(I'm using data from the ARC-JAXA Information System (IJIS) from the International Arctic Research Center in corporation with the Japan Aerospace Exploration Agency and the Advanced Earth Science and Technology Organization of Japan.) 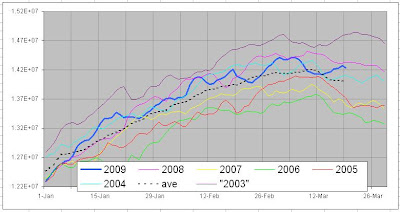 Here's the full picture, from IARC-JAXA: 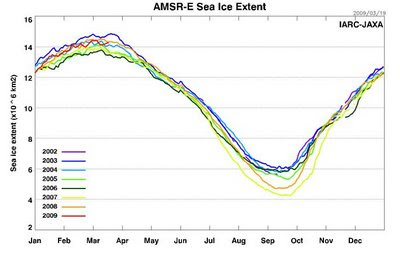 Bottom line? The Arctic is still relatively cool compared to the last half-dozen years, but warmer than last year, as is also seen in the NASA GISS and Hadley surface measurements.