US debt, today vs WW2

Here's an interesting graph of US federal debt vs GDP: 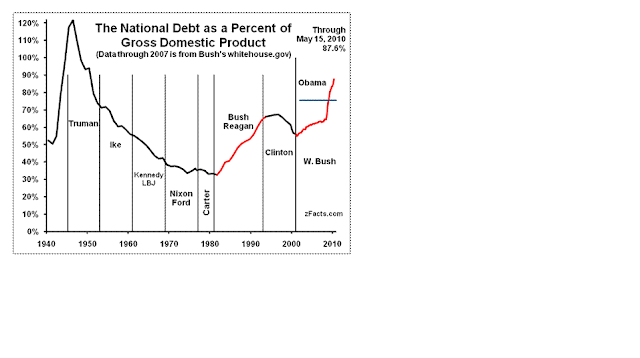 This is interesting because it shows that it's been mostly Republican administrations that have created the debt problem.
Is the debt a problem? Who knows, but here's an important data point, as elucidated by Jim Quinn on the ultra-libertarian site LewRockwell.com. At first glance, it does seem to make a certain amount of sense -- we are not at all in times like post-WW2:

When I read Paul Krugman and the other Keynesian boneheads saying that our debt is not a problem, they quote figures about our debt of $13.3 trillion versus our GDP of $14.6 trillion not being so bad. That is only 91% of GDP. They point to World War II when our national debt reached 120% of GDP. They say everything worked out after that.

Well lets analyze that comparison for just a second. In 1945, Europe, Russia and Asia lay in ruins. The devastation was epic. The United States stood alone as the only unscathed country in the world. America became the manufacturer to the world. We rebuilt Europe and Asia. Our GDP soared, as our National Debt declined from $269 billion in 1946 to $255 billion in 1951, remaining below $300 billion until 1963.

Nonetheless, all of a sudden the crocodile tears over debt is an election season ploy and these people can't be taken seriously. And a ploy by the misguided people wanting to throw more people out on their own.

You need to add control of congress to get a more accurate picture.

The decline starting in 1992 was during a period when congress was controlled by Reps. and the white house by Dems.

Yes but its absurd to suggest the USA is the only country whose manufacturing was unscathed. Hint you are not very far from another large economy unscathed by WWII, and I think 4 of the current top 10 economies suffered little damage to their manufacturing in WWII.

Googling suggests in 1950 the US was ~27% of world GDP and Europe had about the same share.