I wish I could read just one article about the Higgs boson without the phrase "the God particle," but it's probably too late. Is any editor ever going to publish an article without it, now, even if the writer wanted to (and most probably don't)?

The phrase comes from Leon Lederman's 1993 book (written with Dick Teresi) The God Particle: If the Universe is the Answer, What is the Question?, and that came from Lederman, who had been using it as a joke. This is from the preface to the 2006 edition of the book: 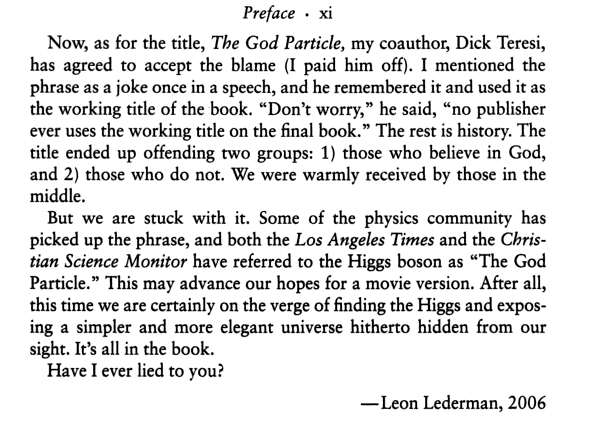 Teresi is a former editor at Omni who has a penchant for titles that try a little bit too hard, such as Would the Buddha Wear a Walkman? A Catalogue of Revolutionary Tools for Higher Consciousness and "Hungarians Think The Darnedest Things," etc. I know writers don't usually have final say on their titles, and I guess someone knew what they were doing since the book has sold over 100,000 copies. Eck, maybe I'm just jealous. But it's an awkward, unnecessary, and misleading conflation of science and religion, as if science gives credence for any of that.

I was wondering how Peter Higgs feels about the name, and found this article from today in LiveScience. It seems a lot of scientists don't like the name:

Vivek Sharma (UC-San Diego), leader of the Higgs search at LHC's CMS experiment: "I detest the name 'God particle.' I am not particularly religious, but I find the term an 'in your face' affront to those who [are]. I do experimental physics not GOD."

Michio Kaku (CCNY) : "It's an awful name. It does not convey the particle's true role, that it is the last missing piece of the Standard Model, and that it gives mass to the other particles."

Matt Strassler (Rutgers): "I feel the term 'God particle,' invented by a publisher to sell books and make money, insultingly misrepresents both science and religion."

Kyle Cranmer (NYU): "[It] carries almost no information about why the Higgs particle is important, it makes physicists sound pompous and arrogant, and it reinforces a very harmful presumption that physicists are trying to replace or compete with 'God,'...."

Gordon Kane (Univ Michigan): "'God particle' is a bad name, in every way. It has nothing to do with the physics. Most (all?) physicists dislike it."


The story goes that Lederman originally wanted to name the tome "The Goddamn Particle" because of how difficult it was to detect, but was persuaded by his publisher, Delta, to shorten it.