Hot Spot or Not?

Here is what the U.S. Climate Change Science Program wrote in their 2006 report.

John Christy of UAH and Carl Mears of RSS were both lead authors on this section, which concluded that uncertainties prevented any definite comparison between models and measurements.

Below is a rather complicated chart from this report. The relevant box is 3rd from the top, for the tropical troposphere.

Note that back then both UAH and RSS measured much larger trends (and again different) than they do now:

with the model average being ≈ 0.18°C/decade. Since then RSS and UAH have seen essentially no change in the middle troposphere in the tropics, and in fact some cooling.

The models though, according to Spencer, show an average warming of about 1.2°C over their 34 years, or about 0.35°C/decade, twice the rate of their 1999 versions.

RealClimate says, "The models have large differences in their tropical variability (which depends on their representation of El Nino-like processes in the Pacific)." 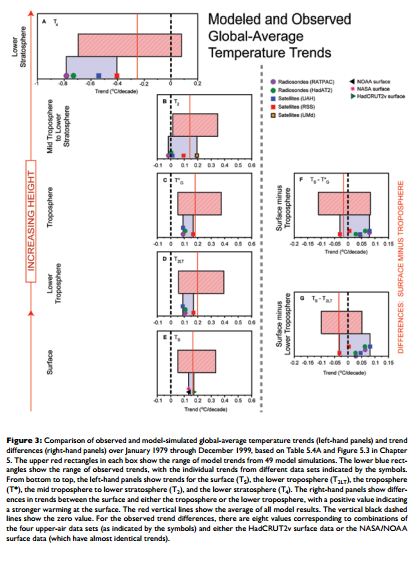