Nikola Tesla and the Pigeon 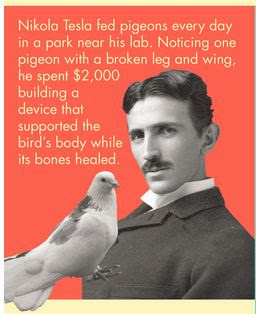 This Tesla item is from the Perimeter Institute, in Canada -- "What Great Scientists Did When they Weren't Doing Great Science." They have several more here.

One they didn't mention, but that I particularly like, was Arthur Eddington's method of tracking lifetime cycling progress -- the largest integer N such that one had cycled at least N miles on N different days.

Some people call this the "Eddington Number," which is funny because Eddington is known for (among many other things) his interest in the fine structure constant α, which he claimed was exactly equal to 1/136, and for his calculation that the exact number of protons in the universe (with an equal number of electrons) was NEDD = 136 × 2256 ∼ 1079, or, as he said in a 1938 lecture at Cambridge: