Did Willie Soon Lie to Congress?

Part of the background for today's NY Times article on the corporate money received by Willie Soon is this case study by Greenpeace. It shows Soon received $58,380 in 2001-2002 from the American Petroleum Institute for a study on the sun's influence on climate over the last 1000 years, and $60,053 in 2003 to study "1000 years of solar variability," which apparently was the funding for his and Baliunas's infamous Climate Research article that led to several journal editors resigning.

In the CR article they acknowledge the American Petroleum Institute as one of their funders:

That paper was published January 31, 2003, and I reported on it for Scientific American in June 2003. I asked them how much money they had received from the various funders, including the API, but they wouldn't tell me. (In fact, they would only answer questions in a list I emailed to them, with no followups.) Soon was receiving grants from the API as early as 1994.

But on July 29, 2003 Soon testified before the Environment and Public Works committee of the U.S. Senate. Here's his initial testimony, which doesn't seem to include any questions he was asked: 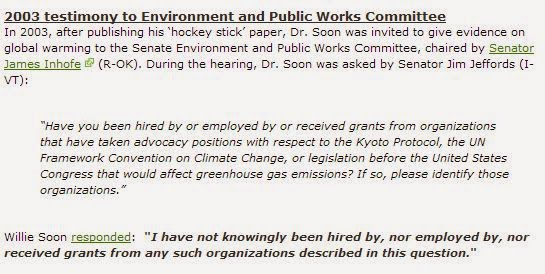 Hmm.... A 1998 memo by Joe Walker, a PR representative for the American Petroleum Institute, lays out the Action Plan for Walker's Global Climate Science Team. It includes, among several other points

That sure sounds like an "advocacy position." Was Soon, who had been dealing with the American Petroleum Institute since at least 1994, really not have been aware of the API's position on the Kyoto treaty? (Was anyone?) Maybe, but it seems a very big stretch.

Maybe something is finally going to come from all this. The New York Times article quotes both the director of the Harvard-Smithsonian Center and the secretary for science at the Smithsonian Instute (I couldn't get a comment from the Center's director back in 2003), who finally seem concerned about Soon's failure to disclose funding sources when journals he published in required it.

That, rather than the accuracy of his testimony to Congress, could be Soon's undoing. I've never understood why the  Harvard-Smithsonian Center for Astrophysics, which does a lot of good work, would keep Soon on their staff. Could it have been the grants he was bringing it?

Stoat finds Soon's statement that "I would never be motivated by money for anything" "astonishing." Gavin Schmidt told the NY TImes, “The science that Willie Soon does is almost pointless." But maybe not pointless to everyone -- the US never did sign the Kyoto treaty.

Gavin Schmidt told the NY TImes, “The science that Willie Soon does is almost pointless."

I chuckled when I saw that. The whole point was to sow doubt, and Heritage and Heartland et al made a lot of hay with the B&S papers.