How to Avoid 300,000 American Premature Deaths By Addressing Climate Change*

A paper by Drew Shindell and others in the latest Nature Climate Change finds significant benefits to Americans if the United States does its part to hold global warming to 2°C.

The annual reduction in emissions needed for the US contribution's to 2°C by 2050 is, they find, -2.7% per year. (Details in their Supplementary Material.) That translates into

The important numbers are lives saved, mostly from chocking down less in airborne particulates:

Most of the lives saved would, ironically, be in the region of the country most opposed to action on climate change (being among and downwind of coal plants): 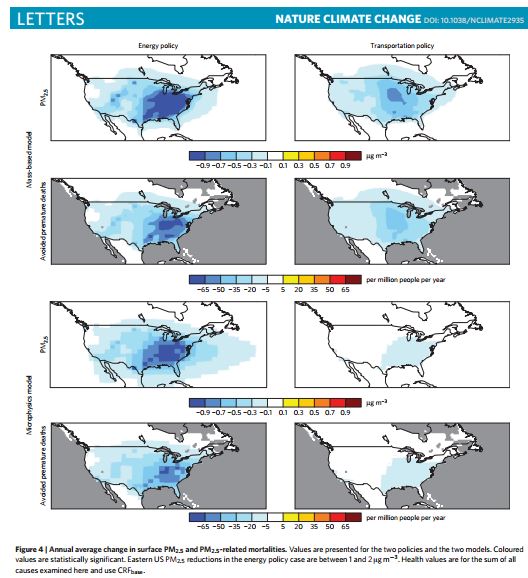 The cost of these reductions? They write that the EPA (Environmental Protection Agency) estimated implementation costs for the proposed Clean Power Plan are US$7 billion to US$9 billion. This plan, they say, "achieves roughly half of the CO2 emission reductions of our energy scenario."

For the other half of reductions needed?


"Although costs might increase as reductions deepen, this suggests that at least for the first half of the energy sector emissions reductions the net societal benefits are roughly 20–80 times the implementation costs. Furthermore, an analysis with emissions reductions similar to ours estimated 2030 economy-wide additional costs of ~US$110 billion to US$210 billion. Another study found that provision of all energy by renewables could leave energy costs virtually unchanged. Hence, benefits seem to outweigh costs by at least a factor of 5–10 even for deep decarbonization with costs more than tenfold greater than the Clean Power Plan. The air quality-related health benefits are realized almost immediately and are primarily domestic, so that the near-term national gains alone (Fig. 5) are also larger than the implementation costs in contrast to the temporal and spatial mismatches between emissions controls and benefits typical of climate policies."

What's not to like? Only that the reductions make far too much sense for idiotic, dumb-as-dogs U.S. legislators perpetually on their knees before fossil fuel interests.
Posted by David Appell at 2/29/2016 11:51:00 PM