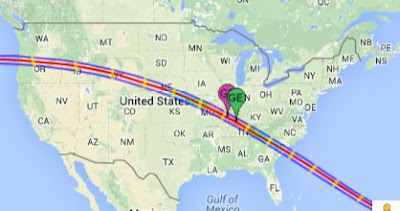 There's going to be a spectacular total solar eclipse on August 21, 2017, and if you'll be near it you really should put it on your calendar..

Especially if you live in Oregon.

I wrote about this eclipse several years ago, but it's getting closer all the time. The Oregonian says some hotels here are already booked solid.

I think it will be especially spectacular in Oregon because:

But it's going to be good elsewhere, too, weather permitting. (I suspect, but don't know for sure, that even with cloud coverage over the entire sky above you there will get some darkness.) The eclipse's path will cross the eastern US coast about 7:45 am EDT (I think). Correction: per the comment below from NationalEclipse.com, the eclipse will start in the east coast about 1 pm EDT, with totality around 2:45 pm EDT.

Portlanders: You won't see the eclipse from Portland. Head south for an hour or so.

NASA has a great site on eclipses.

As I wrote earlier, I still remember my first solar eclipse -- I must have been 7 or 8, and just as it was starting my mother asked me to run over to my grandmother's to borrow a cup of sugar or something. I was terrified of looking up at the sun because of all the warnings not to look straight at it, and ran the whole way staring at the ground as best I could. I don't remember if it was a total eclipse or not. I don't think it was.

When I was an undergraduate, there was a light-hearted essay in Physics Today saying that Earth's eclipses were proof of God. I wrote more about that here.

Thanks for helping to spread the news about the 2017 eclipse. It's going to be an amazing event! Your readers are invited to visit NationalEclipse.com for more great information.

Your time for the East Coast of the U.S. is incorrect. The eclipse will start around 1pm ET, with totality occurring around 2:45pm ET. Here is a semi-comprehensive list of times for cities within the path: http://NationalEclipse.com/cities.html

Thanks for that correction. I changed it in my post.

Michael Zeiler, a Santa Fe map and eclipse nerd who helped me write about the last big eclipse when I was still at the newspaper, has a great collection of information, maps, etc. http://www.greatamericaneclipse.com/