Here's a really interesting set of graphs from Bart Verheggen, an atmospheric scientist in the Netherlands who also writes a blog.

The first graph are the RCPs -- asumptions about the radiative forcing that drives manmade climate change. The second is the resulting level of carbon dioxide in the atmosphere (or its equivalent from other greenhouse gases.)

The third graph is the kicker -- the resulting surface temperature. It declines very slowly from its peak -- on a millenial timescale: 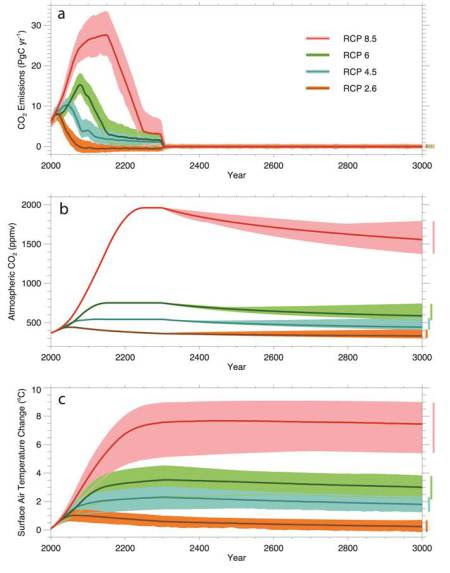 This last graph is the most interesting. We really are, right now, changing the climate for millennia. (It's well worth reading a short book by David Archer, who pioneered studies like this: The Long Thaw: How Humans Are Changing the Next 100,000 Years of Earth's Climate.)

I don't think the public has realized this yet. As Bart writes:


Because intuitively many people might think that as soon as we have substantially decreased our CO2 emissions (which we haven’t), the problem will be solved. It won’t, not by a very long shot. Even if we reduce CO2 emissions to zero over a realistic timeframe, the CO2 concentration in the atmosphere – and thus also the global average temperature- will remain elevated for millennia, as can be seen in the figure below. The total amount of carbon we put in the atmosphere over the course of a few hundred years will affect life on this planet for hundreds of thousands of years.

The next 4.000 generations of humans, or whatever they have become, are not going to look kindly back on our generation (± 1). We'll likely be viewed as reckless environmental Neanderthals.

Verheggen also links to another interesting plot, from two Dutch science journalists, Rolf Schuttenhelm and Stephan Okhuijsen at their blog. It's a little more complicated, and assumes no aerosols, so their value for climate sensitivity isn't right (the radiative forcing from aerosols so far has been about -1/2 that of CO2's). Climate sensitivity's value shouldn't depend much on where exactly CO2 is around its current value (but it could depend some on it). So I'm not going to pick this graph apart -- see their post. 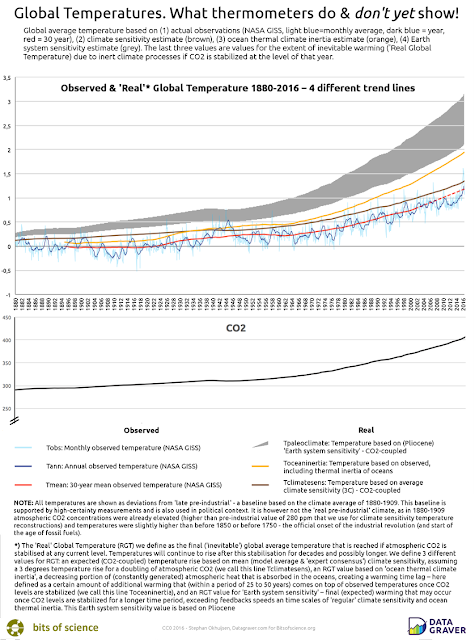