The Stupidest Argument Ever

NoTricksZone has a summary of a talk by Murry Salby, the guy who says the increase in atmospheric CO2 is natural (but never publishes). Or it's not increasing at all. So does Judith Curry.


40,000 people perished last winter alone in Europe due to hypothermia because they could not afford to heat their homes, he reminds us.

This is truly beyond stupid. We're supposed to warm up the entire world for the next 100,000 years by enough degrees (5C? 10C?) to prevent hypothermia so these relatively few people, who need better furnaces and insulation from their governments, can stay warm?

That's just beyond absurd. It's like cooling down your entire house so you can keep ice cream on the kitchen counter.

It's a lame, desperate argument and I can't believe a so-called scientist -- or any intelligent person -- would ever try to use it. 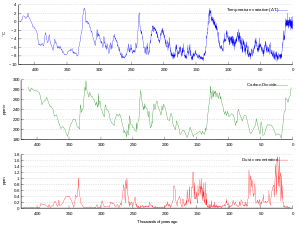 If you think the 120 ppm increase in atmospheric CO2 is natural -- from an increase in temperature -- here's a question for you.

It's bizarre that Curry ever promoted Salby. Even more so that she continues to.

Is there any crank Judith won't promote, if he says what she wants? So far I would say, no.

I think Salby's argument is that the greens are responsible for the hike in fuel prices. Yet price hikes are as much to do with depleting reserves of coal and oil as due to AGW mitigation efforts.

I watched the whole video because I am fascinated by insane rambling and Salby does say that only 100 years of fuel reserves are left. This indicates that he at least acknowledges that cheap and readily-available fossil fuel is non-renewable and in finite supply. Which means he realizes that has no solution to cheap energy either.

So what else is there left to say but that he is a cranky contrarian that just enjoys messing with people. Much like Lindzen IMO. Curry does not fit the mold of either Lindzen or Salby as she would never create such intricately-woven (yet flawed) arguments. In other words, Curry needs Lindzen and Salby, but not vice-versa.

This is truly beyond stupid. We're supposed to warm up the entire world for the next 100,000 years by enough degrees (5C? 10C?) to prevent hypothermia so these relatively few people, who need better furnaces and insulation from their governments, can stay warm?

We're supposed to recognize that driving up the price of fossil fuels will cause more deaths from hypothermia.

I love Curry's reply when pressed on having an actual opinion on whether or not she thinks Salby is correct:"I’m extremely busy. I’m waiting for salby to write this up. I am way beyond being bullied by anyone to spend a lot of time on a topic."